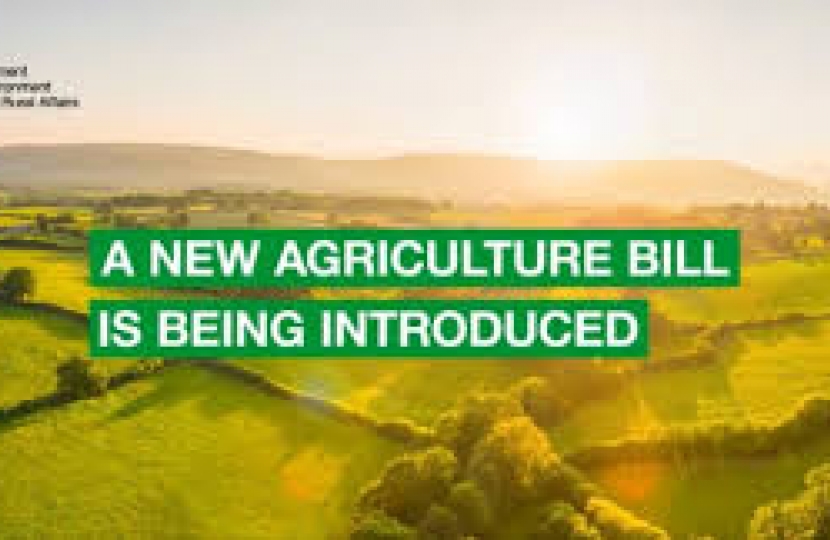 Over the past few weeks a lot of constituents have been in touch with us about the Agriculture and Trade Bills currently passing through parliament. You can learn more about both crucial pieces of legislation and their progress through the Houses of Parliament by clicking:

The Agriculture Bill introduces a new way of managing land beyond the EU's Common Agricultural Policy. In future farmers will be supported to deliver 'public goods' like better air and water quality, higher animal welfare standards and countryside access.

The Trade Bill allows us to rollover free trade agreements to which we were party as an EU member and set up important new parts of our trade architecture like the Trade Rememdies Authority which prevents dumping.

A lot of constituents have been advised by campaign groups that these pieces of legislation will undermine the UK's high food and animal welfare standards. Julia's reply to those concerns is pasted below.

Thank you for your email regarding food and animal welfare standards, particularly in relation to free trade agreement negotiations. Given that we have received a high volume of correspondence on this issue over the past week, I hope you will not mind my replying in a way that covers a number of the points raised by constituents. I am sorry not to provide individual responses but we are under a lot of pressure at the moment with both standard-format campaign emails and, more pressingly, individual constituents with complex problems related to covid-19 whom we must prioritise.

First, a number of constituents have raised their concerns about my vote against particular amendments on food standards that were proposed to the Agriculture Bill. This vote has been mischaracterised by campaign groups online as a vote to diminish food and animal welfare standards.

To clarify, the amendments in question sought to include a requirement in any new free trade agreement that partner countries produce goods to our domestic regulations and standards. While I appreciate the superficial attraction of such an idea, it would fundamentally undermine our ability to strike new free trade agreements as in nowhere else around the world do existing trade agreements include such a requirement. Insisting on UK domestic regulations being applied to the production of food, and not just on sanitary and phytosanitary (SPS) standards of what we allow to be imported, would be an unprecedented barrier to trade that does not currently exist, including in our previous trading arrangements as an EU member. It would also damage developing nations where access to UK markets is key to lifting millions out of extreme poverty.

A number of constituents have engaged with me over the last few years on the issue of animal welfare and food production standards post-Brexit. In previous replies, I have explained that I used to sit on the International Trade Select Committee and that we as a committee had explored how the UK can best strike ambitious new free trade agreements while maintaining – and indeed improving – our own very high animal welfare standards – an issue on which I share your interest. As I explored with the witness from Compassion in World Farming, this could include the imposition of very high tariffs on any animal product that has not been farmed in a way which matches those standards, effectively making it uneconomic to import such product.

Some correspondents on these issues this week have highlighted an article in the Daily Telegraph published recently that suggests the UK will allow the import of chlorinated chicken from the United States. However, the headline overlooks the substance of the article. The article in fact outlines that what is being considered by Ministers is the kind of suggestion explored in Committee with animal welfare advocates – namely that a dual tariff regime could be adopted that will place higher tariffs on food produced to non-UK standards so that it effectively becomes uneconomic for those producers to send food to the UK. This would hopefully ensure we comply with our obligations as a WTO member and allow us to strike new FTAs without seeing our own domestic farmers undercut by foreign competitors who produce to a lower quality and animal welfare standard.

The Government asserts its continued commitment to upholding our high environmental, food safety and animal welfare standards now that we have left the EU, and intends to stand firm in trade negotiations to ensure any future trade deals live up to the values of farmers and consumers across the UK. When we leave the EU, we will maintain the same import standards. No UK import standards will be diminished as part of a free trade agreement (FTA). We will also ensure that our own high domestic environmental protection, animal welfare and food safety standards are not undermined, by ensuring in any future agreement British farmers are always able to compete.

We will be involving the National Farmer’s Unions across the UK through the Government’s Strategic Trade Advisory Group and our sector specific expert trade advisory groups to ensure the views of the industry are represented. This means that they have a voice at the highest level of our trade negotiations. On this note, a number of constituents have requested that we establish a food standards commission to uphold the quality of the food we eat. I have now made representations on behalf of those constituents to our Environment Secretary, George Eustice, to ask that he notes the strength of support for this idea and lets me know what consideration he will give to it.

The government’s analysis shows that the agri-food sector will benefit from any new comprehensive trade agreements. For example, an agreement with the US could remove tariffs of up to 26% on British beef, a market only recently opened and which is estimated to be worth £66m to UK farmers over the next 5 years. It could do the same for lamb. It is not well understood that the US are the second largest importers of lamb in the world and even a 3% market share could boost annual UK exports by £18m. That is why, the CEO of the National Sheep Association says a USFTA “would benefit sheep farmers in all parts of Great Britain.”

Trade also improves farming resilience. So, our trade is vital for carcass balancing, the ability to sell cuts not wanted in the UK – and to deal with demand shocks and seasonal availability. Trade agreements will help and enhance UK farmers’ access to new markets, boost productivity and generate valuable new opportunities.

Finally, it is worth noting that the Trade Bill before the House is a continuity Bill. It cannot be used to implement an agreement with a country that did not have a trade agreement with the EU before exit day, such as the USA. Any forthcoming debate on this legislation is not about future deals and structures, it is about providing continuity for businesses so they can continue trading under existing arrangements. A number of correspondents have asked for improved parliamentary scrutiny of any FTAs and this is something that I too advocated and actively explored with the now former Trade Secretary, Liam Fox, when I was a member of the International Trade Committee. I am happy to raise constituents’ views on this with the new Trade Secretary, Liz Truss.

Thank you again for taking the time to write to me about these important issues as we carve out our first independent trading strategy in forty years.