Article for The Sun on Knife Crime 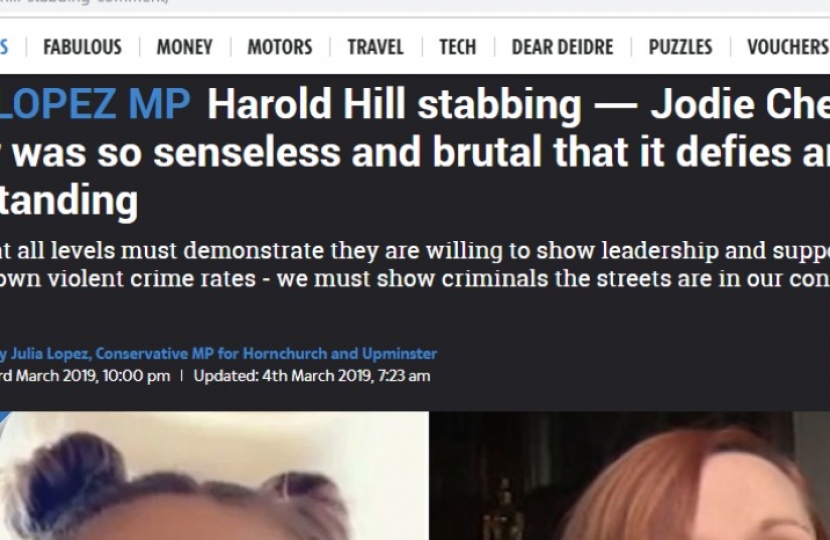 Following the tragic events in our constituency on 1 March, I was asked to write about knife crime for The Sun. JULIA LOPEZ MP

The act of violence that took place in my constituency on Friday night was so brutal, so senseless, so disproportionate, that it defies any understanding.

Jodie Chesney was only seventeen years old when she was murdered in a Harold Hill park, and the indiscriminate savagery shown to her stirs intense rage in us all. Jodie was not a constituent of mine but went to our local sixth form college and was, by all accounts, a warm, engaged and kind student. What has her death achieved for her murderer beyond the wanton devastation of her family, boyfriend and friends, and the lost potential of a bright young woman?

Over the course of the weekend I have been in contact with our Borough Police Commander and his Deputy, as well as Mayor Sadiq Khan and his team. Some of the police officers who came to Jodie’s aid on Friday night were back on shift the very next morning, showing enormous dedication and resilience despite bearing witness to the most distressing of scenes. At the time of writing, it remains unclear what led to Jodie’s murder, who perpetrated the crime and how that perpetrator could have become numb to such violence, so I do not wish to make clumsy assertions on ‘lessons to be learned’.

What does seem clear from my eighteen months as an outer London MP, however, is that the kind of crime that we may once have associated mainly with our inner cities is seeping into the capital’s further reaches. Official statistics do not always reflect perceptions on the ground, and when a knife is threatened in a street mugging or an act of violence takes place in a quiet suburban area, confidence in law and order can rapidly be lost. If young people begin to feel unsafe, the temptation only increases for them to carry a weapon too, so it is important not to let such perceptions escalate.

This is why my team and I had been dedicating such a lot our time these past months to encouraging every part of the system to get a grip on these issues. One of our focuses has been on trying to secure additional police funding for the Met as cash has undoubtedly been a worry. Following private meetings with the Prime Minister and Home Secretary, we were able to obtain just before Christmas up to £172 million extra for the Met this year. I know from conversations with senior forensics officers that this resource is already making an impact, with crime analytics and detective teams beefed up - but we now need to see more consistency in that funding so that officers can plan longer into the future.

It is clear too that policing has become much more complex over the past decade, with officers asked to carry out a broader range of activities, faster, as crime patterns and gangs’ business models adapt rapidly with technological change. Police numbers are important, for sure, but working out how best to deploy resource is critical too. Carefully building cases against criminals higher up the food chain, who so ruthlessly exploit young people as an expendable resource, should be as important as reacting to the acts of violence they encourage.

The Offensive Weapons Bill going through parliament tightens laws over knife carrying and acid sales, and the government's Serious Violence Strategy is looking at early intervention and prevention, tougher law enforcement and tackling county lines. But we must get the system firing on all cylinders, which is why we have tried to pull together schools, GLA members, councillors, policing teams and charities to focus on issues like school exclusions, family breakdown and the effectiveness of Youth Offending Team referrals, which too often fail to act as a deterrent. Resourcing of social and children’s services is also critical to making sure our police are not simply plugging gaps.

Finally, politicians at all levels must demonstrate not only that they understand public anger over the senseless loss of young lives but are willing to show leadership and support to police in driving down violent crime rates with relentless, laser-like focus. Nobody should pretend these issues are easy to solve. After all, the perverse sense of entitlement that allowed someone to see it as their right to steal Jodie’s life, betrays a complete absence of values, decency and human empathy. But criminals need to know that our attempts to understand their path to violence will be complemented with a hard-nosed intolerance of the mindless destruction they mete out on innocent young people like Jodie. It is time we showed that communities and streets are within our control, not theirs.