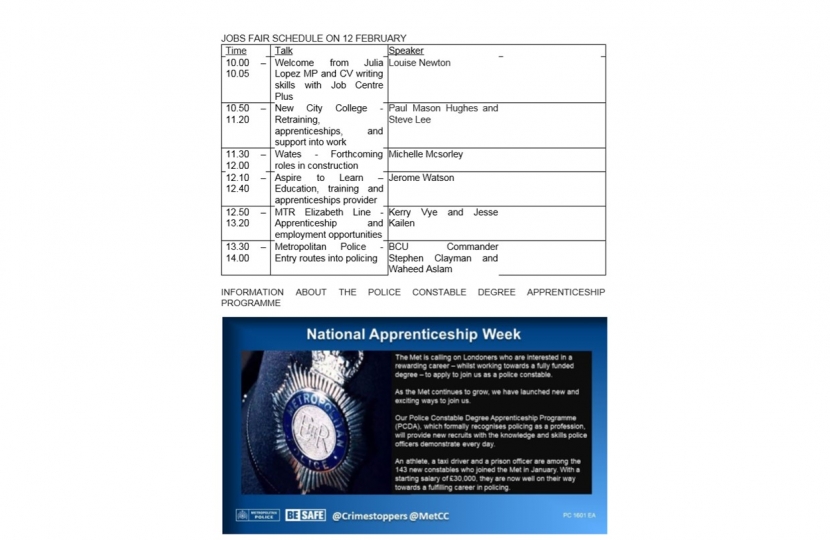 Hornchurch & Upminster MP, Julia Lopez, was holding her third online Jobs, Skills & Apprenticeships Fair to celebrate National Apprenticeships Week and invited DCS Clayman to showcase the new apprenticeship route into the Met that he pioneered. Before moving to Romford as BCU Commander, Mr Clayman led work to develop new entry routes into the capital’s police force, including a new degree-holder pathway to boost the number of detectives.

He and Mrs Lopez have been working together to increase police numbers in outer London as part of the government’s pledge to recruit 20 000 new officers. Since the government launched the major police recruitment drive over a year ago, the Met has been bolstered by an extra 1369 officers and last month, the first new cohort of apprentices began their roles. The police constable degree apprenticeship is a three-year programme that allows people to be employed as an officer while studying for a professional policing degree free of charge.

DCS Clayman was joined by Waheed Aslam, the Met’s Outreach Recruitment Lead, who highlighted the varied roles across the Met and opportunities to develop an extraordinary skillset. Mr Aslam also emphasised the difference that local recruits of every background can have in making their communities safer.

Mrs Lopez and her team had to move their popular local Jobs Fairs online due to the pandemic, following a successful first event at Queen’s Theatre, Hornchurch, last February. This latest fair, put on with the help of the local Jobcentre Team, placed an emphasis on skills and included presentations on support into work, retraining and apprenticeships from Aspire to Learn ​ and Havering College, now of the New City College group. Sessions were also hosted by construction firm, Wates - who are looking for new Havering recruits to work on the redevelopment of local estates - and the Elizabeth Line, who set out apprenticeship opportunities as Crossrail nears completion.

Welcoming DCS Clayman’s commitment, Hornchurch and Upminster’s MP, Julia Lopez, said ‘​I am incredibly grateful that Stephen took the time to speak to those interested in joining the Met at my virtual fair. There has been a big drive on increasing the different pathways for joining the Met and I would encourage anyone considering an apprenticeship or seeking new employment to consider such a career. Local recruits are essential to building trust within our communities and fostering better relationships between the authorities and the people they protect. We want to keep hosting our jobs fairs for local people of all ages who might be looking for work, training opportunities or a change of direction. A big thank you to all those who attended and presented - we hope that exciting new opportunities result from it for constituents in Hornchurch & Upminster'