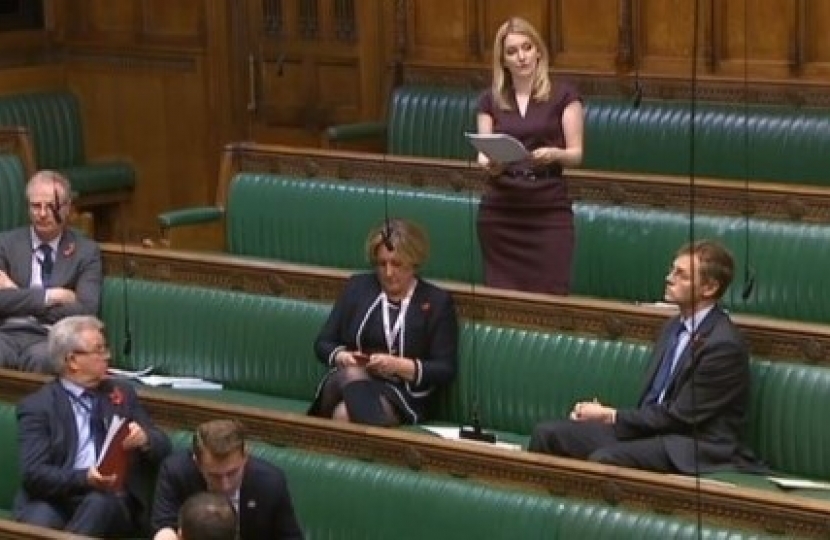 There is much to celebrate in the Chancellor’s autumn Budget, which carefully balances the need to spend more on key services with the need not to snuff out progress in repairing our economy. Having listened carefully to the criticisms from Opposition Members this afternoon, I am left only with the sneaking suspicion that if we had announced £100 billion of extra spending, Labour Members would probably have advocated £200 billion, using our constituents’ money to hose their party in crowing virtue.

The first duty of any Government is to keep their citizens secure. In a world of rapidly changing threats from both state and non-state actors, the substantial additional money for the armed forces and the £160 million extra for counter-terrorism policing operations are timely and welcome. If we fail to retain skilled personnel or keep up with technological changes in warfare, and if we look only at the immediate challenges while our enemies plan for the next half-century, we risk reneging on our principal commitment to the electorate.

Our vital reforms to welfare have been broadly welcomed by the public, who understand the inherent justice of making work pay. However, if those reforms are to maintain public confidence, it is vital that they are funded correctly. Universal credit is only just beginning to roll out in my constituency, and I know that my local jobcentre has been eager to use the new tools available to them with universal credit. The £1,000 increase in UC work allowances, the boost to the minimum wage, the increase in the personal tax allowance, and money to ease the transition to universal credit will make crucial differences to the credibility, and therefore the sustainability, of our welfare policy.

My main high streets in Upminster, Elm Park, Harold Hill and Hornchurch are sustained by lively independent retailers who work exceptionally hard and take risks to provide jobs and services to the local community. The cut in business rates by a third for retailers with a rateable value under £51,000 is vital to their sustainability. Coupled with cash for high street regeneration, money to repair roads and the removal of rates for public toilets, I hope that we shall begin to see a revival of small town centres.

We all know that the NHS faces massive additional cost pressures from an ageing population and expensive new medical advances. The Government have set out an unprecedented multi-year funding plan that equates to over £20 billion more a year in real terms by 2023-24. I hope that will put the finances of our major hospitals on a sustainable footing. The demographic pressures on outer London of growing numbers of children alongside a rapidly ageing population, the PFI debt burden and difficulties recruiting staff place constant pressure on the budget of my local hospital, Queen’s. Beyond that, any additional funds must be relentlessly focused on investments that ultimately bring down the cost of the NHS. In that regard, I put in a plea for a nurse training facility in outer east London to reduce reliance on agency staff, measures to boost primary care to keep people out of hospital and, as a special request from a young constituent, the full implementation of the Think Autism strategy. I also want to raise the concerns of my local hospice, Saint Francis, which is worried that the NHS pay award will make it harder for hospices to get the right staff. I ask that their needs be considered, given the exceptional support they provide to the terminally ill and their families.

None the less, I must sound a note of concern. The NHS is now consuming an ever larger slice of the national pie—it is projected to account for 38% of public service spending by 2023—and this will have consequences. Even if we removed the extra money for NHS England, however, the Budget suggests that spending pressures on our local police and councils would likely continue. We have been giving councils more power to raise revenue, and yesterday we announced £650 million to ease short-term social care pressures. That is right. The core schools budget is to rise, too, and primary and secondary schools will get some additional capital spending, but I fear that these measures will prove insufficient to keep at bay the rising costs and demand pressures in my outer-London constituency, particularly on special educational needs provision, additional employer pension contributions and increased use of statutory services that squeeze money needed for other critical elements of council work.

The NHS boost must be openly debated before the spending review and set against other public spending priorities. Health is vital to my constituents, but if they were asked whether the NHS should be the almost exclusive beneficiary of additional public funds, or whether a portion should be given to our overstretched police forces, schools and councils, I am not convinced the health service would secure all the bounty. People in my constituency are worried about crime and frustrated at the Mayor of London’s leadership of the Metropolitan police, which is seeing outer-London boroughs deprioritised against inner-London ones. Beyond the precept, we need to be confident that the Home Office is providing the funding that police officers need to meet their increasingly complex workload.

Finally, I would like to issue a word of caution about Brexit. It has been suggested in the approach to the Budget that any failure by MPs to back the Government’s eventual Brexit deal will jeopardise our ability to turn on the spending taps in the spring. Parliamentarians on both sides of the divide have expressed concerns about the Chequers strategy, as has the EU itself, and I am anxious that we avoid a deal cemented with unacceptable concessions or a proposal that slithers us into an indefinite period of limbo. Either scenario would heighten the risk of no deal and the prospect of a radical Labour Government, which would have profound implications for the public finances. The cost of Labour’s renationalisation programme alone is £176 billion.

I have heard it said that most of the electorate care little about customs unions, trade deals or regulations, and that they just want an agreement of any shape and then to move on. I caution MPs against making that assumption. One resident wrote to me last week:

“Speaking to people locally, I feel I am not alone in worrying that what we will end up with is just what we have now without any influence.”

The best way to protect our public finances from a Labour Government, unleash our economy from uncertainty and bring about the growth that can pay for better services is to negotiate a deal with the EU that is not only deliverable but gives our nation the flexibility and autonomy it needs to make the most of Brexit.

I should have liked to say much more about investment, growth and trade policy, all of which ultimately underpin the provision of strong public services, but I will conclude by suggesting that what matters above all to our constituents is not the amount spent on each service but the outcomes from and quality of those services. We must not forget value for money, the risk of false economies and the inadvertent pressure placed on other Departments amid the laudable desire to put the health service on a firmer footing.