Of course I recognise that animals are sentient beings... 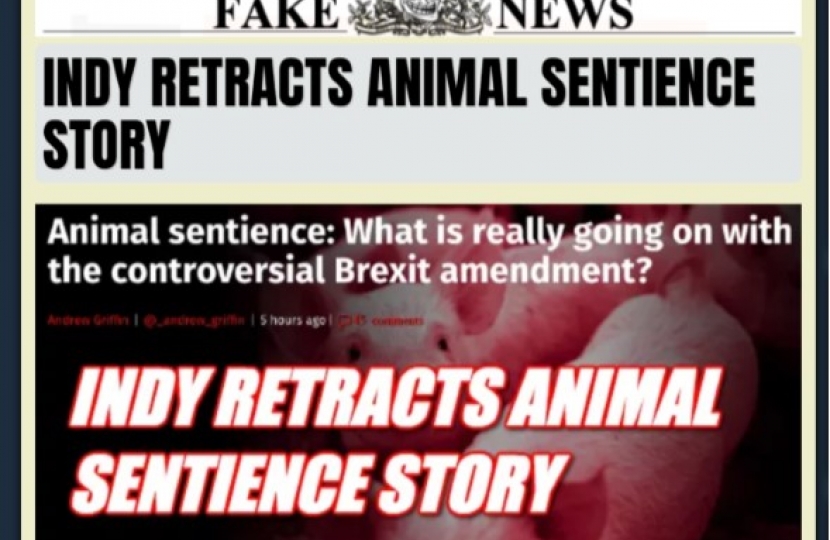 This week, I have received a number of tweets and emails from constituents who are worried by stories they have read which suggest I do not recognise animals as 'sentient beings'. I have sent the below response to those constituents to clarify where this story has come from and why I believe the story to be absurd. I wish to assure constituents that I, and the government, are committed to high animal welfare standards in the UK and have been actively working towards making those standards even higher.

Thank you very much for your email regarding the issue of animal sentience. I can assure you that I recognise animals as sentient beings and share the government’s commitment to high animal welfare standards.

The vote to which you refer relates to New Clause 30, an amendment tabled by Green MP, Caroline Lucas, to the EU (Withdrawal) Bill, a piece of legislation which we are currently debating as it works its way through the Houses of Parliament. Ms Lucas wished to transfer the EU Protocol on animal sentience set out in Article 13 of Title II of the Lisbon Treaty into UK law, so that animals continue to be recognised as sentient beings under domestic law.

Since animals are already recognised as sentient beings in UK law, Ministers argued that the amendment was an unnecessary duplication of existing provisions. Our job as legislators is to make good law, and this duplication would have created confusion on the statute book. The Bill, in focusing on our withdrawal from the EU, was not the appropriate vehicle for matters on animal welfare, which are to come in a separate piece of legislation. We therefore voted against the amendment. This was not a signal that we want to see weakened protection for animals and it was not a vote against the idea that animals are sentient and feel pain.

The rejection of Ms Lucas’ amendment was then turned into a viral news story, aided by newspapers like the Independent and Evening Standard, which suggested that Conservative MPs have ‘rejected all scientists and voted that animals don’t feel pain’ (Independent). Frankly, this is totally absurd and deliberately misleading. Those stories were then retweeted and endorsed by celebrities like Ben Fogle.

In response, the Environment Secretary, Michael Gove, issued a statement making clear what the vote was about and Mr Fogle has since apologised and advised ‘I have now deleted the misleading threads and welcome the government’s clear line on animal welfare’. I attach Mr Gove’s letter to MPs which sets out his position. Unfortunately sensible discussion and understanding of these matters takes longer than producing a provocative, one-sentence soundbite so as a mechanism for damaging the government’s reputation, this story has been expertly executed.

I roundly reject the notion that it is the European Union which protects British animals from cruel treatment. The UK has some of the highest welfare standards in Europe, whereas practices such as bullfighting, veal farming, foie gras production, beak trimming, baby quail hunting and even goat throwing exist in other EU nations. This whole episode has been a real shame as it has detracted from the ambitious message that the Environment Secretary has been setting out on animal welfare since he took his post. Recent steps include making CCTV mandatory in all slaughterhouses, consulting on draft legislation to jail animal abusers for up to five years and introducing Europe’s most comprehensive ban on the ivory trade. He has further ambitions to make us a world leader in animal welfare, including on puppy welfare and live animal exports.

For my own part, you may be interested to know that I sit on the International Trade Committee and this week we had Compassion in World Farming and the NFU as our witnesses. We spent nearly half the session exploring how the UK might be able to strike a trade deal with the United States which maintains our own very high animal welfare standards. As I explored with the witness from Compassion in World Farming, this could include the imposition of very high tariffs on any animal product that has not been farmed in a way which matches those standards, effectively making it uneconomic to import such product.

I hope this helps reassure you that the UK takes animal welfare seriously and that compared to our European neighbours that feelings of our animals, domestic, wild and farm, are considered much higher than that written into the Lisbon Treaty.