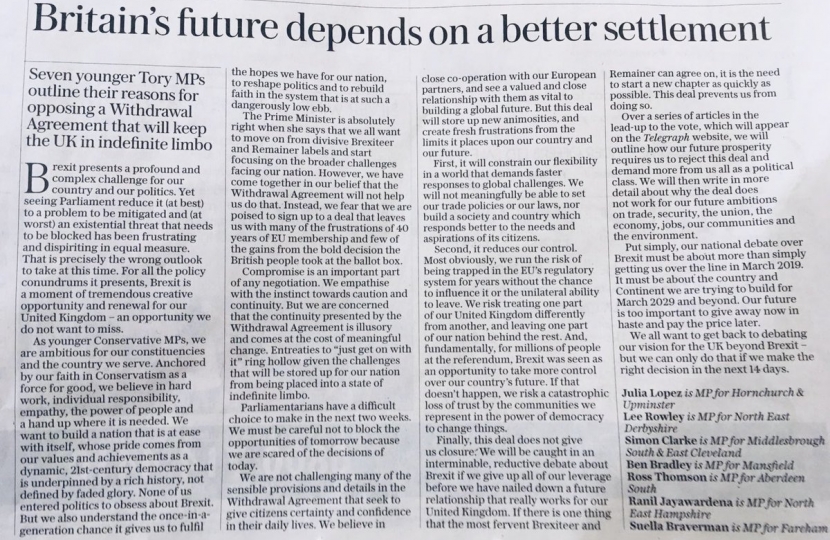 Brexit presents a profound and complex challenge for our country and our politics. Yet seeing parliament reduce it at best to a problem to be mitigated, and at worst an existential threat that needs to be blocked, has been frustrating and dispiriting in equal measure. That is precisely the wrong outlook to take at this time. For all the policy conundrums it presents, Brexit is a moment of tremendous creative opportunity and renewal for our United Kingdom – an opportunity we do not want to miss.

As new Conservative MPs, we are ambitious for our constituencies and the country we serve. Anchored by our faith in Conservatism as a force for good, we believe in hard work, individual responsibility, empathy, the power of people and a hand up where it is needed. We want to build a nation that is at ease with itself, whose pride comes from our values and achievements as a dynamic, twenty-first century democracy that is underpinned by a rich history, not defined by faded glory. None of us entered politics to obsess about Brexit. But we also understand the once-in-a-generation chance it gives us to fulfil the hopes we have for our nation, to reshape politics and to rebuild faith in the system that is at such a dangerously low ebb.

The Prime Minister is absolutely right when she says that we all want to move on from divisive Brexiteer and Remainer labels and start focusing on the broader challenges facing our nation. However, we have come together in our belief that the Withdrawal Agreement will not help us do that. Instead, we fear we are poised to sign up to a deal that leaves us with many of the frustrations of 40 years of EU membership and few of the gains from the bold decision that the British people took at the ballot box.

Compromise is an important part of any negotiation. We empathise with the instinct towards caution and continuity. But we are concerned that the continuity presented by the Withdrawal Agreement is illusory and comes at the cost of meaningful change. Entreaties to “just get on with it” ring hollow given the challenges that will be stored up for our nation from being placed into a state of indefinite limbo. Parliamentarians have a difficult choice to make in the next two weeks. We must be careful not to block off the opportunities of tomorrow because we are scared of the decisions of today.

We are not challenging many of the sensible provisions and details in the Withdrawal Agreement that seek to give citizens certainty and confidence in their daily lives. We believe in close cooperation with our European partners, and see a valued and close relationship with them as vital to building a global future. But this deal will store up new animosities, and create fresh frustrations from the limits it places upon our country and our future.

First, it will constrain our flexibility in a world that demands faster responses to global challenges. We will not meaningfully be able to set our trade policies or our laws, nor build a society and country which responds better to the needs and aspirations of its citizens.

Second, it reduces our control. Most obviously, we run the risk of being trapped in the European Union’s regulatory system for years without the chance to influence it or the unilateral ability to leave. More fundamentally, however, for millions of people at the referendum, Brexit was seen as an opportunity to take more control over our country’s future. If that doesn’t happen, we risk a catastrophic loss of trust by the communities we represent in the power of democracy to change things.

Finally, this deal does not give us closure. We will be caught in an interminable, reductive debate about Brexit if we give up all of our leverage before we have nailed down a future relationship that really works for our United Kingdom. If there is one thing that the most fervent Brexiteer and Remainer can agree on, it is the need to start a new chapter as quickly as possible. This deal prevents us from doing so.

Over a series of eight articles in the lead-up to the vote we will outline how our future prosperity requires us to reject this deal and demand more from us all as a political class. We will then talk in more detail about why the deal does not work for our future ambitions on trade, security, the union, the economy, jobs, our communities and the environment.

Put simply, our national debate over Brexit must be about more than simply getting us over the line in March 2019. It must be about the country and continent we are trying to build for March 2029 and beyond. Our future is too important to give away now in haste and pay the price later.

We all want to get back to debating our vision for the UK beyond Brexit – but we can only do that if we make the right decision in the next fourteen days.