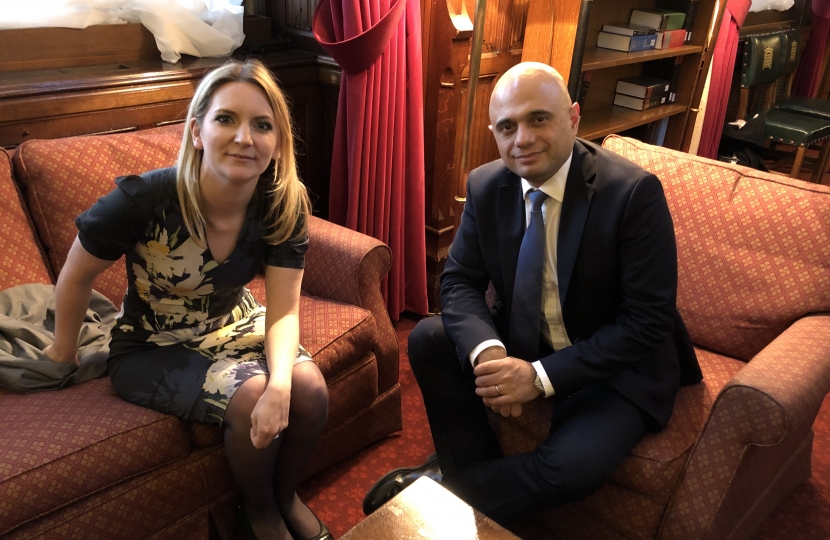 Julia recently called for constituents who wished to comment on the IR35 review announced by the Government to write to her directly so that their comments may be provided to the Chancellor of the Exchequer, The Rt Hon Sajid Javid MP.

We are grateful to those who did and a full copy of your comments have been passed to the Chancellor with the request that they be included within the formal review process. Julia has also requested that the Chancellor advise on whether the Government would consider deferring the proposed changes until a more comprehensive review has taken place.

A copy of Julia’s representations to the Chancellor is provided below:

Last year, I thrice wrote to you and the Financial Secretary to the Treasury to outline my constituents’ concerns about the introduction of IR35 off-payroll rules in the private sector. I therefore welcomed your subsequent announcement in the General Election campaign that these changes would be subject to review. I understand this news was also received enthusiastically by many parliamentary colleagues, who had noted the frequency with which IR35 was raised on the doorstep.

The Budget in March will be the first to take place since our formal withdrawal from the European Union, and will be watched closely by global competitors for any signals it contains about the type of nation we seek to be after Brexit. You will be aware that I represent a constituency in London’s outer ring, and many of my constituents commute into the centre of the city where they are employed in the capital’s world-beating service industries. As such, I have received a large number of representations from service industry contractors who not only fear that IR35 will have a detrimental impact on their personal finances but believe it is a misguided policy to pursue at this particular juncture. Our services industries may well face challenges in continuity of trade with the EU as we thrash out a free trade agreement, and London will need to be ever more vigilant about maintaining our existing competitive edge over other global service centres.

I have previously raised in parliament concerns that policy changes affecting private contractors might negatively impact upon London’s critical services sector. Part of the capital’s appeal to international investors in recent years has been the pool of flexible, highly-skilled labour available to companies based here. The growth of the contractor market has enabled large firms and start-ups in particular to build short-term, highly-specialised teams to undertake specific projects and then shed those teams once a particular piece of work has been completed. Access to this dynamic, readily-available, highly-specialised labour pool has been a particular boon to the technology sector, where London is stealing a march in the area of fintech in particular.

However, as firms anticipate the introduction of IR35, many smaller organisations are now suggesting complex and onerous ways to circumvent the legislation to contractors or, in the case of many large banks, blanket banning the use of contractors altogether and offering salary packages for permanent roles that are substantially less competitive. If the Treasury’s intention is to collect additional revenue, I have received representations suggesting that the use of loopholes combined with lower incomes for contractors returning to permanent work will likely suppress any potential fiscal benefit.

While contractors in my constituency have welcomed your review of IR35, they have expressed disappointment that this review does not include any form of public consultation. Given that I have been contacted by ten constituents directly on this matter, as well as individuals from other constituencies, I wish to bring their views to your attention by way of this letter so that they too may be considered within this process.

In the fortnight since I highlighted this review with constituents, two have contacted me to say that they have been informed that they will have to either leave their current roles, move to PAYE or work through an umbrella company. I enclose representations from Mr X, who has suggested that the changes would force him either to consider closing his company or significantly reducing the services in which he engages. Mr X, meanwhile, has stated that skilled software engineers are actively considering leaving the UK due to the loss of flexibility that the changes will herald.

My constituents’ principal objection to these changes appears to centre upon the notion that it is unfair to tax contractors full PAYE as an employee when they do not enjoy the employee benefits of their permanent equivalents. I note from earlier correspondence with the Financial Secretary to the Treasury that the Government has stated that there is not currently a link between an individual’s employment taxes and employment rights, however, it does recognise that differences between tax and rights frameworks should be kept to a minimum. As my constituent, Mr X, has noted, were the proposed arrangements introduced, the contractor would effectively pay for these benefits within their salary. Mr X has advised that moving to PAYE may cost him approximately £1-1.5k per month without employee benefits.

Mr X has highlighted the formal response by the Chartered Institute of Taxation to the then draft legislation and has noted the need for improved guidance to users and protections to prevent excessive penalties where errors have been made and recovery of PAYE from links in supply chains.

Within his comments, Mr X has advanced several suggestions as to how the Government might ensure that contractors who are placed on extremely long contracts pay the appropriate amount of tax. These include introducing regulations that would set a maximum length of contract for companies who are engaging an individual via a Private Service Company or adapting a version of the ‘Freiberuflich’ principle which operates in Germany, where contractors have time limits on employment in return for lower taxes.

In addition to the comments I have received from constituents, I have also been contacted by the Recruitment & Employment Confederation (REC) who claim that 83% of businesses state the IR35 changes will negatively affect their industry. The REC, Mr X and Mr X have highlighted concerns at the depth of the review and consider that the implementation of the changes should be delayed until a more thorough assessment of the policy can take place. The REC has suggested that this could take the form of an Independent Chair and Body review, as took place with the Loan Charge, or the review should include an assessment of the impact of the changes following their implementation in the public sector.

I should be grateful if my constituents’ comments and the submission from the REC could be included within the formal review process. Full copies of these submissions are enclosed with this letter. I should also appreciate your advice on whether the government might consider deferring the proposed changes until a more comprehensive review has taken place.