Latest on Brexit - why I voted as I did 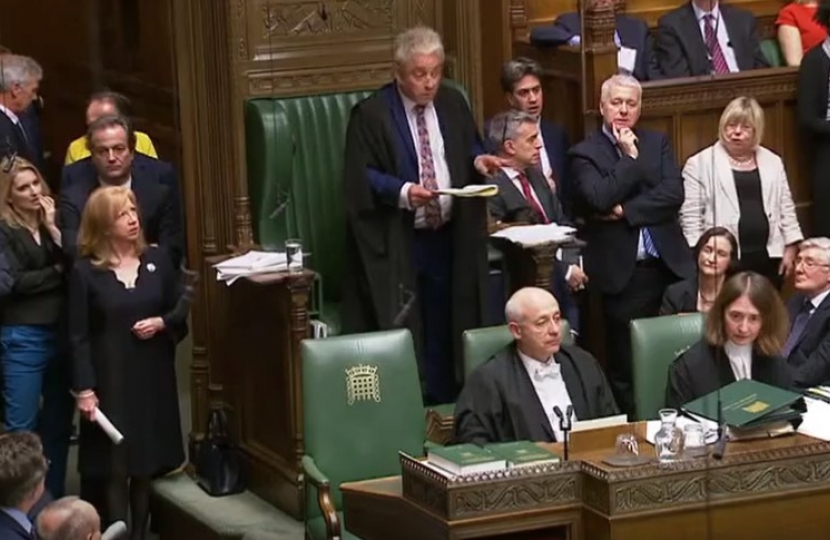 I sent the following reply to those constituents who emailed me about critical votes in the week beginning 25 March, which included a round of so-called indicative votes on alternative options to the Prime Minister's Withdrawal Agreement, and a third vote on the Withdrawal Agreement itself.

Thank you very much for your email regarding Brexit. Once again, I am very sorry that I cannot personalise this email, but I have had another 600 emails since I last set out my position on the subject a fortnight ago and with all that is going on in parliament, it is unfortunately not possible to get back to everyone individually. That last reply can be found on my website (click here), alongside other articles and speeches I have made on Brexit for those constituents wishing to learn more about my views. I also apologise once again for the length of this email, but I want to keep constituents properly informed about the choices presented to parliamentarians and why I have chosen to vote in the way I have so far.

When I last wrote to constituents about Brexit, I set out the awful dilemma ahead as we looked to a third parliamentary vote on the Prime Minister’s Withdrawal Agreement (WA) and I outlined why I had not yet felt able to support the Agreement. I have always maintained that it would have been better if we could have left the EU in an orderly way on 29 March. However, given that the WA is so deeply flawed, I would have supported our leaving the EU without a ‘deal’ on Friday to deliver Brexit because Brussels has been so utterly intransigent over the Northern Irish backstop. I set out in my last reply how we might mitigate the negative impact of ‘No Deal’ and I spoke again to Brexit Ministers last week about No Deal planning which reassured me over preparations.

As a quick reminder of why I have not been able to support the WA, I believe it substantially undermines our autonomy as a sovereign state, makes us rule takers not rule makers and cuts off some of the best opportunities of Brexit via level playing field conditions. This is why some have termed it ‘Brexit in Name Only’ (BRINO). We would enter at least a 21-month transition period with no sense of to what we are transitioning, leading to a continuation of parliamentary turmoil. For this we would pay £39 billion with no guarantee of a positive future relationship with the EU. With the threat of the Northern Irish backstop, we would likely be left with a choice of entering a de facto customs union with the EU, alongside parts of the single market, from which we could not unilaterally exit or risk the break up of our nation through the loss of Northern Ireland. I feared a tremendous democratic backlash that would be even worse than the current anger when the consequences of the WA became clear in a couple of years’ time.

Since my last Brexit email to constituents, the Speaker intervened to stop the Prime Minister from bringing her WA for a third meaningful vote on the basis that it had already been twice rejected. Rather than prepare the UK leaving without a deal on 29 March, however, the Prime Minister travelled to Brussels where the EU granted her a further two weeks to get her WA through parliament. This opened another fortnight’s worth of opportunity to those MPs manipulating parliamentary procedure to stop Brexit altogether, delay it or to keep the UK in the single market, customs union or both.

In this way, the government hoped that more Brexit-supporting MPs would vote for the WA out of fear of parliament imposing something worse. Meanwhile a series of ‘indicative votes’ were held to see if an alternative to the WA could command a parliamentary majority.

As a result, last week I voted:

No single option was able to command a parliamentary majority, so the government decided to bring back the WA for a third vote, circumventing the Speaker’s conditions by separating it from the accompanying Political Declaration. Held on 29 March, the day we were meant to be leaving the EU, the government hoped to present anyone voting against the WA as thwarting Brexit. Meanwhile, the Prime Minister indicated to the Conservative Party that she would stand down if the WA was voted through to bring more MPs on board.

The Withdrawal Agreement before us on Friday was completely unchanged to the one rejected by parliament in January in what was the largest Commons defeat of all time. The only thing that had altered was the circumstances, with Brexit-supporting parliamentarians urged to back the Agreement not on its merits but because:

As such, we were presented on Friday with an appalling dilemma and I had to give very serious thought to whether I could vote for the WA as a result. It is a choice that has torn apart Brexit-supporting MPs and those who believe with great passion that it is vital for our democracy that we deliver on the referendum result and set our country up for a positive future relationship with the EU.

In coming to my own decision, I focused on those circumstances that had changed since January, namely:

Will the EU grant us an extension? Some colleagues contend not. Following the Lisbon Treaty, the European Parliament has been given more power within the EU and there is concern among the centre-left and centre-right parties that the EP elections in May will disrupt the current balance of power through the election of additional MEPs from the Far Right and Far Left. As such, they have carved up the UK MEP seats in such a way that would keep more extreme new MEPs from disrupting the European project. If the British people had to elect another set of 70 UK MEPs they might, in their disillusionment, opt for more extreme candidates who could form a blocking minority if coupled with those from the Far Right and Far Left.

If an extension is granted, would we have more leverage to negotiate a positive future relationship within a two-year extension or within the minimum 21-month transition period that the WA mandates? Some would contend that once we are legally out, there will be a ratchet-effect that will ensure we do not ever risk staying in the EU. My concern is that in the transition period, we will have not only given up our key pieces of negotiating leverage – the threat of No Deal, the £39 billion, the commitments in areas of UK strength, the prospect of our becoming a stronger competitive rival – but we will have given up our influence within the EU and place at the table over the rules and laws that will govern us, along with the carve-outs on Schengen and the Euro, our veto and our budget rebate.

In my view, that means that the risk of our being trapped in the backstop is very high and we could end up having less sovereign power over the rules that govern us than currently. Arguably, in an A50 extension there would be more scope to reset negotiations in a way that will lead ultimately to a positive outcome for both the UK and EU.

In coming to a judgement on these questions, this superb article from Tom McTague of Politico - with its excoriating detail on the fundamental failures of the UK negotiating strategy - was particularly instructive. It makes clear that the WA is the result of a negotiation so flawed that it can likely only be salvaged by a complete rejection or reset.

As we look ahead to a further round of indicative votes in parliament today, I intend to vote against a customs union and single market membership and in favour of our leaving the EU without a Withdrawal Agreement. Either we now push on to No Deal or, should an extension be imposed, I believe we must completely reset the negotiation with the EU.

These have been extremely difficult judgements and I accept the risk that I may have got them wrong. In determining that, my electors will be my judge. Some constituents are very happy with the conclusions I have drawn, others have advised that they will not vote for me. That is what our precious democracy is about, and I accept the view of the ballot box.

Thank you again for taking the trouble to write to me with your views. We look ahead now to another tumultuous week, and it is highly likely that we shall be constrained ever further into an unpalatable choice of least-worst options. While I cannot predict what additional pressure will be brought to bear and what parliamentary tricks and tools will be deployed to compress our choices, I shall try as best I can to vote in a sober and rational way with the national interest and mandate of the referendum as my guide.