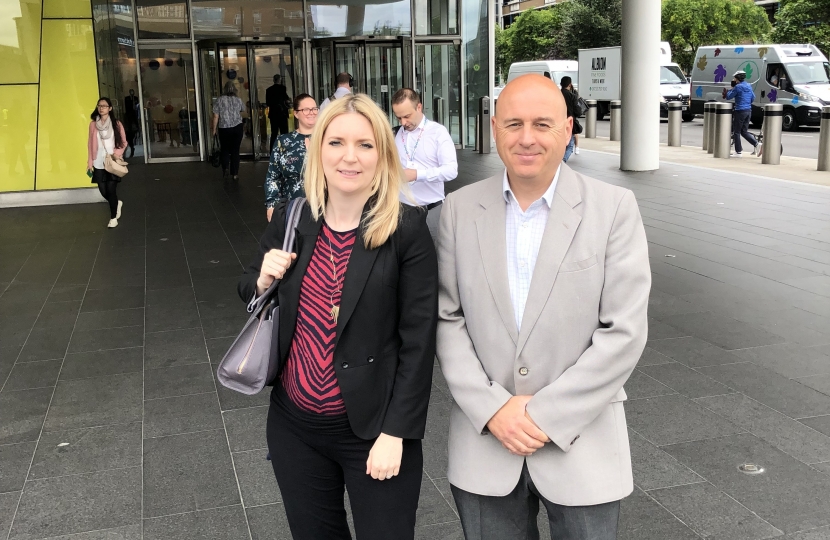 Today I met TfL with our local London Assembly Member, Keith Prince, to call for progress in unlocking improvement cash for the notorious Gallows Corner junction.

Gallows Corner is a major road junction in our constituency with a fifty-year-old ‘temporary’ flyover and five-way roundabout that regularly causes gridlock and is in desperate need of renovation.

Further to meetings I held last year with Transport Secretary, Chris Grayling, to raise my concerns about Gallows Corner, in October it was announced that it has been shortlisted as one of five potential improvement schemes in the government’s Major Road Network programme.

Each of the shortlisted schemes will be eligible for up to £50 million. However, Gallows Corner comes within Transport for London’s road network and responsibility for its improvement therefore lies with Mayor of London, Sadiq Khan.

I have twice written to Mayor Khan asking for TfL’s progress towards making a business case to the Department for Transport for Gallows funding, most recently in June. Today, Assembly Member, Keith Prince and I met TfL at their headquarters to push for an update.

TfL advised that they have now whittled the options down to two likely schemes – a like-for-like replacement of the existing flyover or a new Y-shaped flyover taking vehicles over the roundabout not just from the A127 to the A12 but from one part of the A12 to the other. These proposals will now be worked up into more detailed plans by October, finalised by Christmas and put through traffic modelling before a final plan is presented to the Department in January.

The existing 1970s structure was originally intended to have a lifespan of ten to fifteen years, so the works are well overdue. I believe the business case is particularly strong given the huge growth of the Thames Estuary region and future need to get vehicles coming from London more easily onto the new Lower Thames Crossing. There are also serious safety concerns for other users of the junction that were made all the more pressing by the tragic death last month of Ellie Isaacs, a young lady who lost her life after a collision at one of the pedestrian crossings.

While we wait for overhaul plans to be drawn up, TfL have visited the junction to scope out interim improvement works including new anti-skid surfacing and other routine maintenance works that are expected to take place in late August.

Our meeting was also attended by the Safer Streets and Vision Zero teams who work to improve cycling and pedestrian ways and reduce road deaths across London. Any new Gallows Corner works would include improvements to the junction for all road and path users, and I discussed with the Vision Zero lead the work underway to identify currently vulnerabilities at the junction for pedestrians.

I shall post any further news on Gallows Corner on my website in order to keep constituents in the loop.