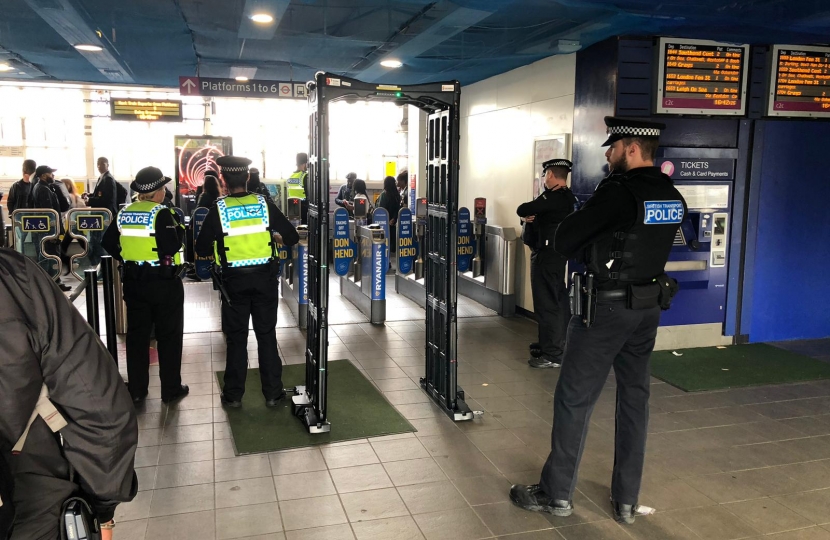 UPDATE 7 Sep - Further to the article I posted below this week and the correspondence between my office and the British Transport Police, I'm pleased to say we have had further ops at Upminster Station this week. We were invited down there yesterday afternoon to see in operation the knife arch we had requested and await a report of how the session went. I have also had a chance this week to talk to the Police Minister about data sharing on habitual knife carriers and the gang matrix and have been assured his officials are working on the issue I highlighted with the Met (see below).

Also this week, we had the Chancellor's Spending Review. He has committed more money to tackling violent crime - an extra £750 million next year for policing to begin delivery of the commitment to recruit 20,000 additional officers by 2023, with £45 million this year to kick start recruitment. His spending plans also allocate funding to begin delivery of the government’s £2.5 billion commitment to create an additional 10,000 prison places, which forms an important part of the government’s wider work to reduce crime. £100 million will also be provided to increase security in prisons, and £55 million and £80 million has been allocated to the Ministry of Justice and the Crown Prosecution Service respectively to support the work of the 20,000 additional police officers and manage the increasing complexity of crime. Additional funding has been provided for crucial probation reforms that will help reduce reoffending and improve post-custody supervision.

Policing rightly remains a priority for residents, and my team and I continue to work to address constituents' concerns about community safety at national, mayoral and local level. I set out a few recent developments below:

Since my election, I have been arguing for additional resource from the Home Office for police. This led to a total increase of up to £172m this financial year for the Met, and an additional £100m in March to tackle knife crime, setting up a Serious Violence Fund to pay for additional operational activity.

To update constituents, the Met was allocated £20.84m of this funding and a further £7m to establish Violence Reduction Units (VRUs). I have been exchanging letters with the Mayor about the use of this funding and feeding into him some of the issues coming up at local level further to a meeting I held in Harold Hill with key stakeholders.

One of those issues is the refusal of the Met to share with councils the gang matrix and list of habitual knife carriers as a result of a recent data breach by a London borough. I have raised this with the Police Minister so that we can re-establish proper data-sharing as soon as possible.

Commissioner Cressida Dick was already undertaking a recruitment drive to increase officer numbers and detectives, but the issue of police numbers was raised during the recent Conservative leadership contest as a key issue for MPs across the country. As a result, the Prime Minister made a series of pledges over the summer including the immediate start of a recruitment drive to secure 20 000 police officers, an increase in the capacity and security of our prisons, support for the tactic of stop and search, extra money for the Crown Prosecution Service and an urgent review of sentencing.

I have also been backing the Blue Collar Conservative campaign for a Police Covenant. The government has now pledged to honour that campaign which recognises that police officers are not employees but rather hold the ‘office of constable’, which comes with a high level of personal accountability and responsibility for the protection of life and property. The government’s announcement follows the conclusion of the Home Office’s Front Line Review, which highlighted concerns of police officers and staff and proposed a package of measures to reduce their workloads, ensure their wellbeing and give them a stronger voice in decision making.

For some time, I have been asking for better coordination between borough officers and the British Transport Police to deter muggers using local stations as an entry and escape route. I am very pleased to say that these requests have now been acted upon, with high visibility patrols and the imposition of a detecting arch leading to knife seizures. I paste below the most recent update from operations at Upminster Station. Police ward teams have also been visiting local shopkeepers after officer engagement was raised at one of our most recent meetings with the Upminster traders group that we have helped to establish.

I also met the family of Jodie Chesney last week to talk about the charity they’re setting up to carry on her passion for helping people and community, and ways we can work together on tackling knife crime. Their first official event is charity football match at Dagenham & Redbridge FC on 22 Sep, details on my twitter.

Correspondence on high visibility patrols at our stations

Earlier this morning my office spoke with the British Transport Police to discuss our earlier request that consideration be given by the BTP to deploying a knife arch at Upminster station. This was in response to constituents’ concerns about recent muggings in the area, including one last week where the District line was used by suspects, and also from a series of problems that we had last year when groups of young people were similarly using the District line as an escape route after seeing groups of students in Upminster as easy pickings. When I spoke to the ward team about this at the time, it was proposed that they would liaise with the BTP about one-off deterrence operations.

During this morning’s discussion, the BTP advised of their own Violent Crime Task Force and proactive operations with officers from other forces to reduce violent crime being conducted on the transport network and to apprehend those using it to commit violent crime elsewhere. They also advised that this can include the use of knife arches or smaller hand held detection equipment alongside uniformed and plain clothes officers at train stations to catch those carrying knives and other prohibited items.

BTP have offered to contact local colleagues in order to build an intelligence case for an action in Upminster and to determine what would be the best form for this to take. My office advised of our feeling that a very visible operation would be the best option at this time, given the strength of local concerns and that this would also serve as a very visible deterrent to any potential future offenders. We also said we would write to you to ensure you are aware of this discussion and to introduce your officers.

I hope that your further discussions regarding this action will be positive and I would be grateful if you could update me on them when appropriate.

This correspondence has arrived with me as the Chief Inspector within our Operations Department responsible for violence reduction and weapon enabled crime.

You may know our Violent Crime Task Force attended Upminster Station last Thursday and Friday, 29th 30th August. This resulted in an arrest outside the station of a male in possession of a knife on Thursday. The area was fortunately peaceful on Friday.

Tonight (29/10/19) we were asked to carry out high visibility patrols of Upminster Station and its surrounding areas due to a spate of violent crime and robberies in the area.

We made our presence known to staff members and the travelling public. They were very grateful for our attendance and advised us that having police at the station made a real difference. We also liaised with the local taxi drivers parked in the station forecourt who stated that they have witnessed a lot of anti social behaviour by youths in the area, not in the stations however directly outside and within the retail shops along the high street.

Whilst in the station we had approximately 4 x stops, 2 x intelligence reports and 1 x stop and search.

Whilst we were at the station we were also monitoring local MPS airwaves, where we responded to a call of a MALE brandishing a large kitchen knife outside an address behind the station. We were first on scene and identified the suspect and found the knife involved. He was arrested for Points and Blades and Affray and taken to MPS Freshwharf Custody. The image of the knife was tweeted by MPS and highlighted that we were on scene dealing.

I believe the team will also be attending Upminster again to carry out further patrols.