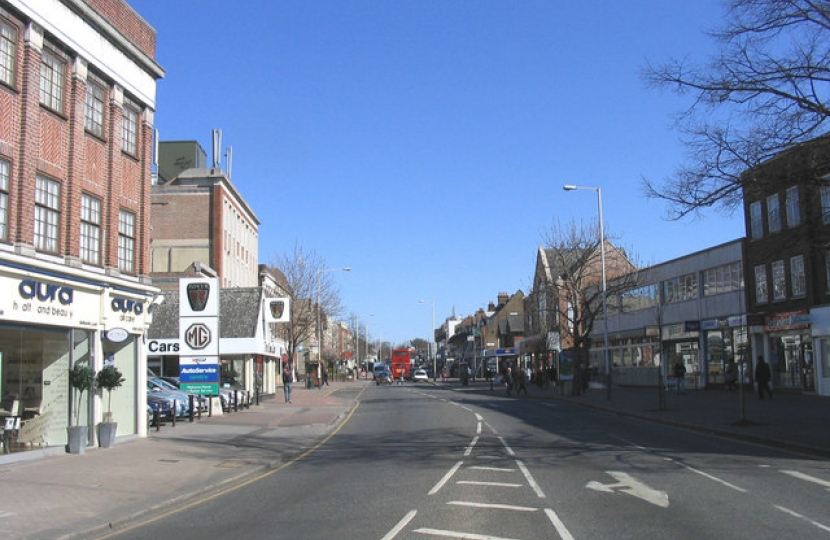 In its February budget, Havering Council decided to change its parking policy by removing in Upminster, Hornchurch and Cranham the existing allowance of thirty-minutes’ free parking.

This has caused a huge amount of upset among constituents in Hornchurch & Upminster, who worry that it will negatively impact our local high streets, community groups and services.

Since the parking charges were voted on by councillors in February, and some weeks beforehand, I have been relaying residents’ concerns about the policy change directly to the Council Leader in person and in writing.

He has defended this policy change to me as follows - the £750 000 of revenue that the council hopes to raise would otherwise have to be found through library closures; the council has benchmarked the charges against other nearby shopping areas and believe that parking charges are low and have not been raised for some years; there is a need to deter commuter parking; and any reversal of policy would have to be funded from the council’s general fund and could lead to an increase in council tax bills that are already too high. The council has also advised me that after one year, they would be reviewing the policy to see whether there had been a detrimental impact on the health of the high street.

For many months, I have been trying to do what I can at national level to address the council’s budgetary concerns in the hope that by easing budgetary pressures we might spark a review in parking policy. Since I am not a local councillor, I have no vote or influence within the Town Hall, so I have focused instead on what I can practically do to address one of the reasons the Leader cited for bringing in these new charges.

I have been making the case in Westminster for an uplift in the central government grant that Havering receives as part of the Fair Funding Review. The acute budgetary pressures placed on the council by our local demographic – specifically, our traditionally high proportion of elderly residents alongside a fast-growing number of children – are not currently properly accounted for by the government’s funding formula. Those concerns, and the wider financial pressures on councils, have been fed back to senior ministers and we have managed to secure some breakthroughs to ease those pressures. These include the lifting of the borrowing cap on councils to assist with the delivery of the council’s ambitious housing regeneration programme; a larger road maintenance and potholes fund to assist with road resurfacing; and additional money for social care and special educational needs. I appreciate, however, that it has not been enough, and I am pleased to say that at the Spending Review this month, the Chancellor confirmed that councils will have much more funding certainty and stability next year through the delivery of a £3.5 billion package for vital council services.

We have not yet received the borough-by-borough breakdown of the figures, so I have arranged a meeting with the Local Government Minister, Luke Hall, to see if we can further ease the financial pressures on Havering Council in a way that would permit an early review of parking charges.

Despite my meetings and representations to the Council Leader, he wishes to retain the new parking policy, although he has said that the charges may require some refinement. In the face of this, and the absence of Conservative councillors on the ground in the affected council wards, I have sought to build influence in other ways including setting up a traders group of shopkeepers and other stakeholders in the area and gathering evidence of the impact of the charges on trading figures. I offered to lead a small delegation of traders to see the Council Leader in order to convey the gravity of concerns over the changes to parking tariffs and their impact on high street trade.

Our request for a meeting was declined on the basis that the Leader hopes to hold a series of trader-specific meetings in the months ahead. So I have sent the Leader a comprehensive letter on the items I wanted to discuss with him and forwarded him anonymised trade figures. In my letter I advocated a holistic review of the borough’s approach to Havering’s high streets, beyond just the reintroduction of the free 30 minute policy, and enquired whether the Leader would be open to a bold approach which sought to remove or drastically lower charges for the first hour of parking in order to drive footfall to our town centres alongside a package of other measures to regenerate the public amenity and promote our shopping parades. I have been engaging with MP colleagues about the parking issue and several had advised that these kind of loss-leader policies in their constituencies had been successful in rejuvenating local high streets.

I also shared with him feedback from traders, councillors and residents that the roll-out of the charges has been piecemeal and confusing, with several ticket machines not yet updated. They are concerned, therefore, that the impact already being felt by shops will go through further waves as and when officers upgrade and modify the remaining ticket machines. They also suspect that the council will not be raising anywhere near as much in projected revenue as anticipated, and therefore any policy change would result in a hit less substantial than £750 000 were a review to take place. I asked that he lets me know how much the council has raised in revenue since the parking changes were implemented and, if those detailed figures are not yet available, a broad sense of whether revenue is either up or down.

The Leader has now replied by letter, reiterating his earlier comments that changes to the tariffs would need to be funded from either higher council tax, additional income from the Council or further savings elsewhere. The Leader acknowledged that there is a need to refine the current tariffs, however suggested difficult decisions would remain without significant change in the Council’s funding grant. As I have mentioned, I hope to address these in person with the Minister.

I have asked the Leader for specific dates of the business engagement meetings so that we can encourage full attendance. The Leader replied that it is his intention to bring forward an overarching business report to Cabinet, outlining how the Council might support local businesses. As part of this process the Cabinet will be arranging meetings with businesses across the borough. However, these meetings have been postponed on safety grounds as he said a council officer was assaulted at a recent surgery he hosted in the area. I regret that I cannot therefore share with local businesses clear details of the Council’s intended engagement at this juncture.

The Leader went on to say that he has committed the Council to bring forward a £30m High Street Improvement Fund and suggests that Upminster and Cranham are intended to be some of the first areas to benefit from this fund. I have asked him for the earliest possible engagement of local businesses in this process so that the value of any investment can be maximised to the benefit of those shops that know the area best.

In my letter, I also drew to the Leader’s attention some of prominent empty premises in Upminster and asked whether the Council would consider either purchasing these premises in the same way that the M&S unit in Romford has been or approaching anchor tenants and marketing the area to them in order to secure key leaseholders to drive footfall. Unfortunately, the Leader discounted these options, advising that vacant premises would not offer a strong enough business case for purchase.

I also asked the Leader whether the Council might look at other innovative ways to attract additional shoppers such as:

Unfortunately, he did not directly address any of these suggestions. I regret not to have been able yet to make a breakthrough on the parking issue or to have been able to coax further details and dates from the Council for meetings with traders. I shall, of course, continue to try to engage with the Council on all these issues on constituents’ behalf and am also doing what I can at national level to unpick the issues the Leader says he is experiencing with central government funding allocations.

I have also asked the Leader to address with urgency the growing perception of Hornchurch & Upminster residents that they are disadvantaged in council policy. Since the feelings towards the council in my constituency are getting increasingly febrile, it is incredibly important that this broader sentiment among the community is tackled head-on.

Residents need to feel that the council shares their enthusiasm to maintain thriving high streets and community hubs, and I encourage the council to look at a package of support to local shopkeepers so that we retain the beating hearts of Havering’s individual towns and villages.