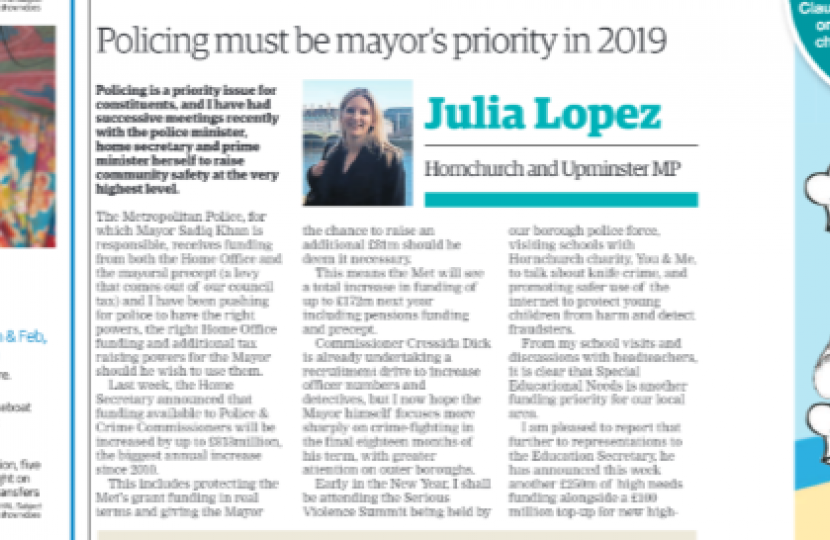 Policing is a priority issue for constituents, and I have had successive meetings recently with the Police Minister, Home Secretary and Prime Minister herself to raise community safety at the very highest level. The Metropolitan Police, for which Mayor Sadiq Khan is responsible, receives funding from both the Home Office and the mayoral precept (a levy that comes out of our council tax) and I have been pushing for police to have the right powers, the right Home Office funding and additional tax raising powers for the Mayor should he wish to use them.

Last week, the Home Secretary announced that funding available to Police & Crime Commissioners will be increased by up to £813 million, the biggest annual increase since 2010. This includes protecting the Met’s grant funding in real terms and giving the Mayor the chance to raise an additional £81 million should he deem it necessary. This means the Met will see a total increase in funding of up to £172m next year including pensions funding and precept.

Commissioner Cressida Dick is already undertaking a recruitment drive to increase officer numbers and detectives, but I now hope the Mayor himself focuses more sharply on crime-fighting in the final eighteen months of his term, with greater attention on outer boroughs. Early in the New Year, I shall be attending the Serious Violence Summit being held by our borough police force, visiting schools with Hornchurch charity, You & Me, to talk about knife crime, and promoting safer use of the internet to protect young children from harm and detect fraudsters.

From my school visits and discussions with headteachers, it is clear that Special Educational Needs is another funding priority for our local area. I am pleased to report that further to representations to the Education Secretary, he has announced this week another £250 million of high needs funding alongside a £100 million top-up for new high-needs school places and improved facilities, and a removal of the cap on the number of special and alternative provision free school bids.