Romford Recorder column - We must properly prepare for No Deal Brexit 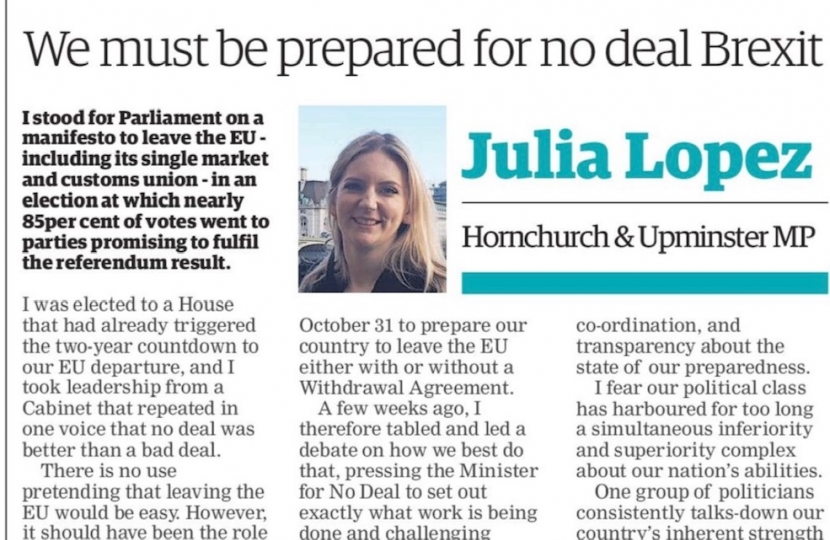 I stood for parliament on a manifesto to leave the EU - including its single market and customs union - in an election at which nearly 85% of votes went to parties promising to fulfil the referendum result. I was elected to a House that had already triggered the two-year countdown to our EU departure, and I took leadership from a Cabinet that repeated in one voice that no deal was better than a bad deal.

There is no use pretending that leaving the EU would be easy. However, it should have been the role of MPs to address and manage that complexity. Many voters now feel enormously frustrated not just because we have failed yet to leave but because they believe democracy has been disregarded. To win back their trust, MPs must use the EU extension period until 31 October to prepare our country to leave the EU either with or without a Withdrawal Agreement. A few weeks ago, I therefore tabled and led a parliamentary debate on how we best do that, pressing the Minister for No Deal to set out exactly what work is being done and challenging Conservative leadership contenders to outline how they will use this time.

If we end up leaving without a ‘deal’, we are going to need more than cosmetic preparations and mantras about WTO terms. It will require major policy prescriptions, strong government direction and coordination, and transparency about the state of our preparedness.

I fear our political class has harboured for too long a simultaneous inferiority and superiority complex about our nation’s abilities. One group of politicians consistently talks-down our country’s inherent strength and resilience, while another parrots slogans of exceptionalism that diminish the practical challenges ahead. The public believes in this nation’s future beyond the EU but expects us also to be clear-eyed and competent in the delivery of it.

Julia warns Havering Residents to watch out for Vaccine Fraud

Fraudsters are targeting elderly and vulnerable people with a vaccine scam as it emerged that people are being asked by scammers for bank details or cash payments for access to vaccines that are fake or non-existent.