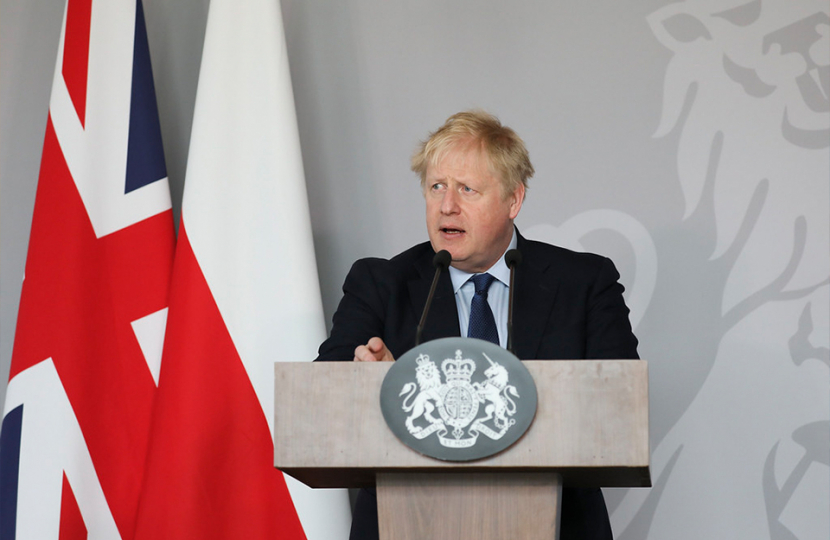 Team Lopez - Julia has received a large volume of correspondence relating to the situation in Ukraine. Below is a copy of the response Julia has provided to those who have contacted her on this issue.

Thank you for your correspondence regarding the tragic events in Ukraine. Like you, I am absolutely appalled at Russia’s unprovoked, premeditated attack against a sovereign democratic state, and the despicable violence being meted out on the Ukrainian people. My heart goes out to them as they bravely defend their country.

Understandably, people across Hornchurch & Upminster are deeply worried about these events and have a range of concerns and questions about them. Due to the significant volume of correspondence I have received on this topic and in the interest of providing a timely reply, I have set out responses to the broad set of issues raised with me. Please bear in mind, however, that this is a very fluid situation which is engaging every part of government, so our response is developing in real time and therefore evolving rapidly.

Most constituents who have written to me have quite rightly focused on the impact that events are having upon the civilian population of Ukraine and the urgent need to provide support to those displaced by the conflict.

The Prime Minister has announced so far £220 million of emergency and humanitarian aid for Ukraine and put 1000 troops on standby to help with humanitarian efforts. The UK is also guaranteeing up to $500 million of loans to Ukraine through Multilateral Development Banks.

Speaking in the House of Commons this afternoon on immigration, the Home Secretary announced a new Ukrainian Humanitarian Route that will allow families to be reunited in the UK, alongside a bespoke sponsor route that will give safety to Ukrainians forced to flee. She has been talking to her Ukrainian counterpart, Vadym Prystaiko, so that our humanitarian support is in Ukraine's best interests and reflects the asks being made of us by its government.

Our range of measures includes:

UK Visas and Immigration staff are being surged to visa application centres in the nearby area and applications are being completed within hours. A hotline has been set-up to assist British nationals in Ukraine, their family members and Ukrainian nationals and I would encourage anyone who is concerned for anyone in Ukraine to contact this hotline which can be accessed at: https://www.gov.uk/guidance/support-for-family-members-of-british-nationals-in-ukraine-and-ukrainian-nationals-in-ukraine-and-the-uk

The Home Secretary has been clear in her statements that the above measures are the first phase of a bespoke humanitarian route and I look forward to further announcements in this area in due course. Indeed, whilst writing this response, the Prime Minister has been speaking in Poland stated that, whilst the total number of Ukrainian’s assisted to the UK is hard to calculate, that over 200,000 could be supported.

Since the military build-up on Ukraine’s borders began, the Prime Minister has been prominent in his support of Ukraine over these past months and has played a leading role in encouraging the West to impose the most severe and coordinated package of sanctions Russia has ever faced. Most notably, the push he made to block access to the SWIFT payment system for Russian banks has now been agreed to by other nations. In coordination with allies, the UK is:

In a statement to the House of Commons yesterday, the Foreign Secretary advised that the UK will continue to ratchet up our response to Russian aggression. You can view the Foreign Secretary’s statement here: https://hansard.parliament.uk/commons/2022-02-28/debates/3D28CB2C-B2E4-40B4-B40A-6D0D1147B6C9/Sanctions

In the months prior to the invasion, the UK provided extra support in the form of 2000 anti-armour missiles, which the Ukrainians are now putting to good use. Since the invasion, the UK has sent further military support to Ukraine and the Prime Minister has stated that further support will continue to be provided. This new package will include lethal aid in the form of defensive weapons, and non-lethal aid such as body armour and helmets.

I understand, of course, people’s desire to see a no-fly zone instituted above Ukraine. However, I would highlight the words of the Minister for the Armed Forces, James Heappey, in the House of Commons that such a policy would present too high a risk of miscalculation and escalation that could ultimately lead to the inadvertent triggering of NATO’s Article 5. This was underlined in the Prime Minister's comments to this question today in Poland.

The British Army leads the NATO Battlegroup in Estonia and, because of this ongoing crisis, is doubling the number of UK personnel based there and sending additional equipment, including tanks and armoured fighting vehicles. The UK also has troops stationed in Poland as part of NATO's enhanced Forward Presence there. Royal Marines from 45 Commando have also deployed to Poland to support the Polish Armed Forces with joint exercises, contingency planning and capacity building in the face of Russia's invasion of Ukraine. This support is being offered on a bilateral basis and is not part of the UK’s offer to NATO. Additional aircraft have also been posted to our base in Cyprus to patrol the skies with NATO Allies in Eastern Europe, and UK warships are conducting patrols in the Eastern Mediterranean Sea alongside NATO Allies from Canada, Italy, Spain and Turkey. The UK has long called on others to increase their contributions to the Alliance, and it is very welcome that, for instance, Germany recently announced that it will henceforth spend 2 per cent of its GDP on defence.

I am a Minister in the Department for Digital, Culture, Media and Sport and was pleased to support the Secretary of State, Nadine Dorries MP, in her request for Ofcom to review the activities of Russia Today in spreading disinformation in the UK.

The department has also been working very closely with sporting and cultural bodies as part of our joined-up response to isolating Russia for its actions.

The FCDO advise against all travel to Ukraine and is recommending that British nationals still in Ukraine should leave immediately if it is safe to do so. I understand people’s desire to help in this terrible situation and I would highlight that the Ukrainian Embassy to the UK has set up a special fund to provide humanitarian assistance to Ukraine’s civilian population and to purchase medical and military supplies for Ukraine’s army. It is possible to donate at www.withukraine.org. As such, I would dissuade any Brit from travelling to Ukraine, whatever the reason.

I have been asked what local charities are supporting the effort in Ukraine and can advise that London Plus are maintaining a list of London-based charities which can be accessed at: https://londonplus.org/news/support-for-ukraine-crisis-london

The Prime Minister has said that nothing is off the table when it comes to the UK's support for Ukraine's sovereignty and territorial integrity and indeed the desire of its people to live in peace, democracy and free from foreign interference. The UK Government, standing alongside our friends in Ukraine and allies around the world, is using all possible means at its disposal and is urgently engaged in efforts to see that Putin fails in his ambitions. I wish to assure you that I am actively involved in those efforts as a government minister and have made clear the people of Hornchurch & Upminster's support for Ukrainian families at this dark and difficult time.

I hope that the above comments are helpful in setting out the breadth of the UK’s response to this conflict. Thank you again for taking the trouble to express your own worries and concerns to me, alongside support for the Ukrainian people.