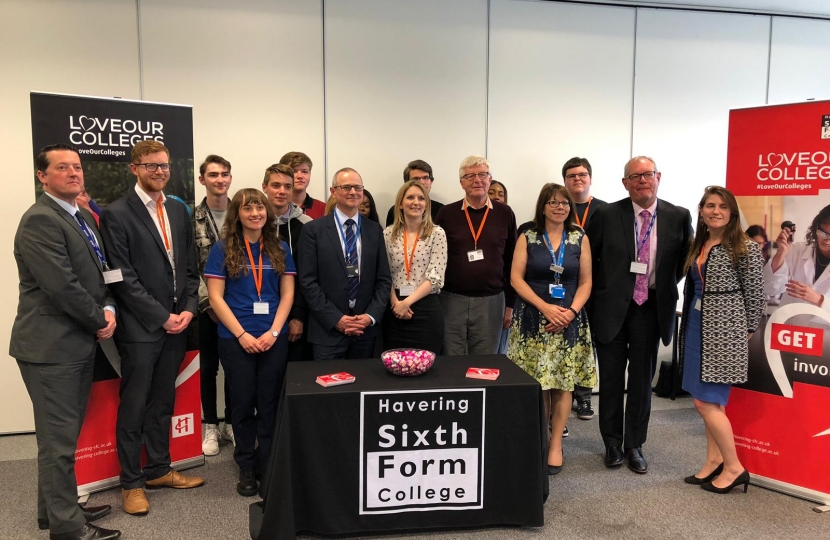 Our campaign to increase the per-pupil funding rate for local sixth formers received the backing of Chancellor Sajid Javid this week after a two-year push with Havering Sixth Form College to highlight the importance of post-16 education.

Providers of 16-19 education such as further education (FE) and sixth form colleges will now receive £400 million additional funding to train and teach young people the skills they need for well-paid jobs in the modern economy, the Chancellor announced on Sunday. The boost is the single biggest annual increase for the sector since 2010.

I met Havering Sixth Form’s Head, Paul Wakeling, soon after my election in 2017 to discuss budget pressures at the college on Wingletye Lane, which guarantees a place for every Havering student. We have since been working together to raise funding concerns and the importance of post-16 education with Treasury and Education Ministers and in parliamentary debates. The Institute for Fiscal Studies reported that education funding for 16 to 18 year olds “has seen the biggest squeeze of all stages of education for young people in recent years”.

I supported the Love Our Colleges campaign in May, a drive to ensure that sixth form and FE colleges are adequately funded, and last week was among a cross-party group of MPs calling for the Chancellor to prioritise investment in 16 to 18 education in the forthcoming Spending Review, expected on 4 September.

I am passionate about this agenda, which I see as key not only to solving the UK's productivity problems and reliance on imported labour but in ensuring our education system is producing fulfilled, confident young people who are ready to join the work force and add their ideas and energy to UK businesses. I am glad that the Chancellor has listened to concerns of MPs who have sixth form colleges in their constituencies, and I hope this week’s announcement is just the start of a more intense focus on skills and budgetary support to the post-16 sector, which will be vital to the future strength of our work force and wider economy.

The Chancellor’s announcement is one of several government commitments on education funding made last week that include a £700 million boost for children with special educational needs, real terms budget increases next year for every primary and secondary school, government-funded increases to the Teachers’ Pension Scheme and a rise to £30 000 in teachers’ starting salaries by 2022-23.

I have made it a personal priority to visit all of the 40 schools and colleges in Hornchurch and Upminster to understand the challenges and opportunities facing the local teaching community, and to offer help in connecting school leadership teams to useful people in Westminster and the constituency. One of the concerns consistently raised with me by local teachers has the pressures on school budgets from higher pensions contributions and special needs education (SEND) provision, as well as the speed at which SEND assessments can be undertaken. These concerns are often shared by parents of children with special educational needs. I have fed those concerns into government via meetings with ministers and helped secure an additional £250 million for SEND just before Christmas. We are already seeing the results, including a new 12-place SEN provision at Nelmes Primary School. The additional SEN and pension money announced this week will ensure that we can build on that progress, but I also continue to explore ways in which we can really improve and expand SEN support at pre-school level as well.