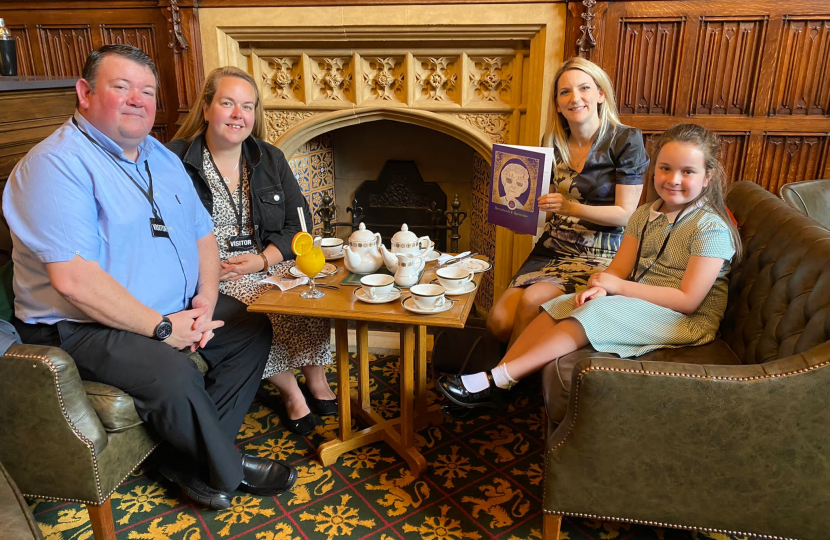 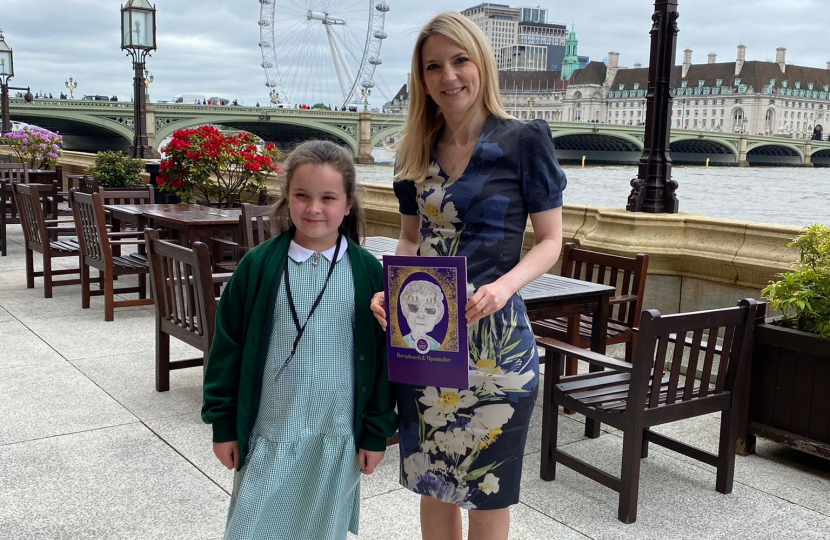 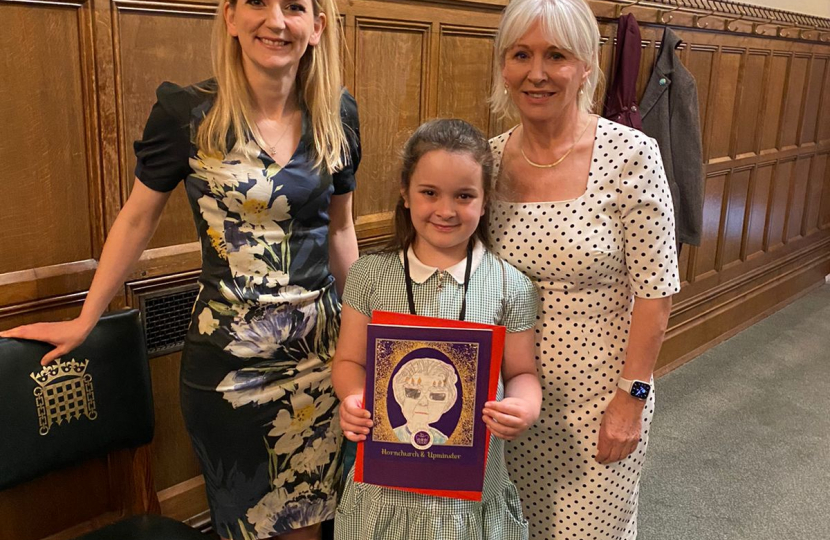 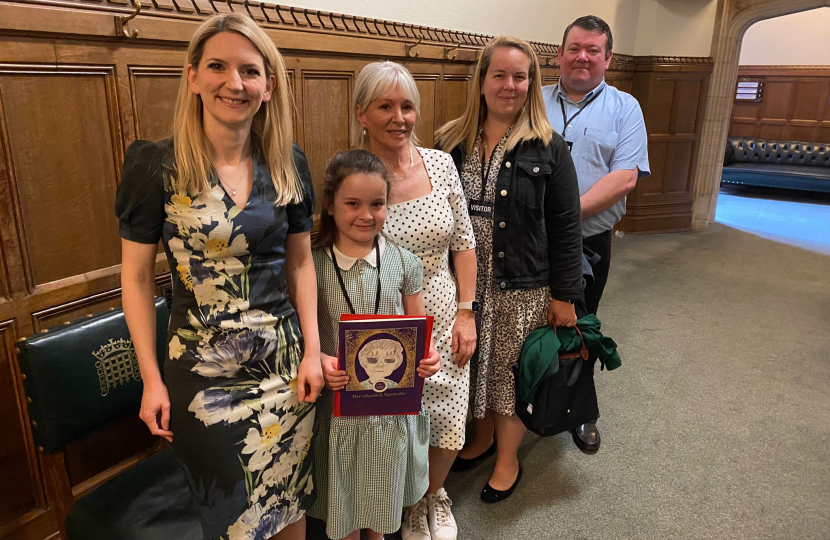 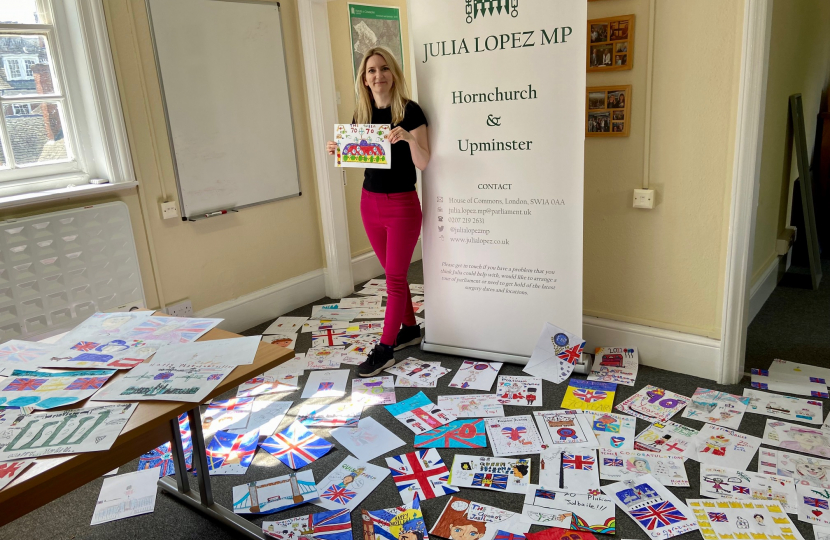 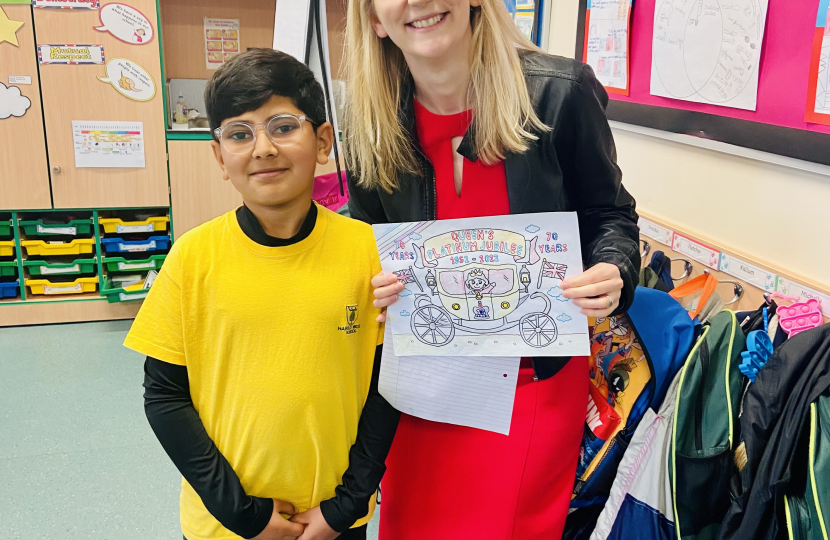 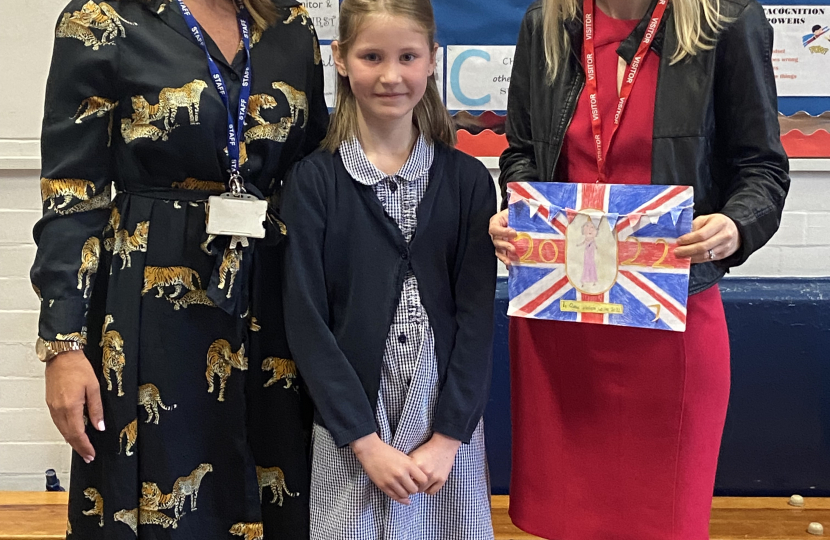 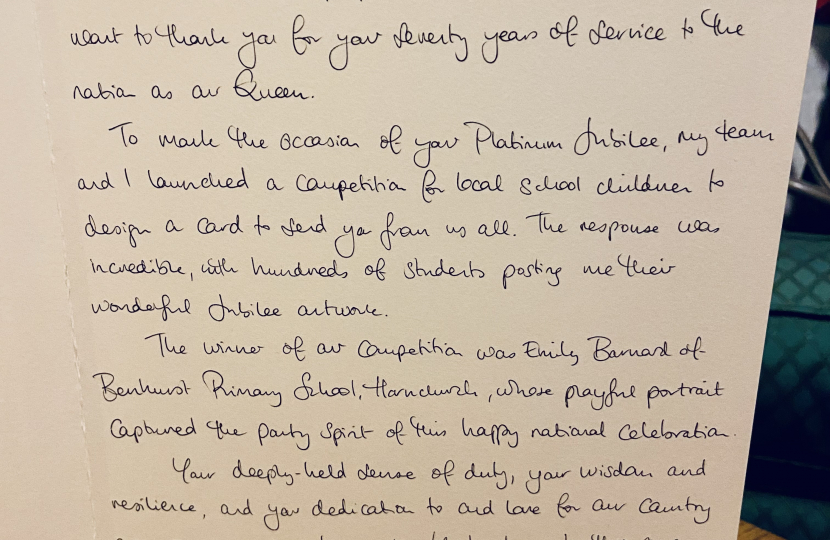 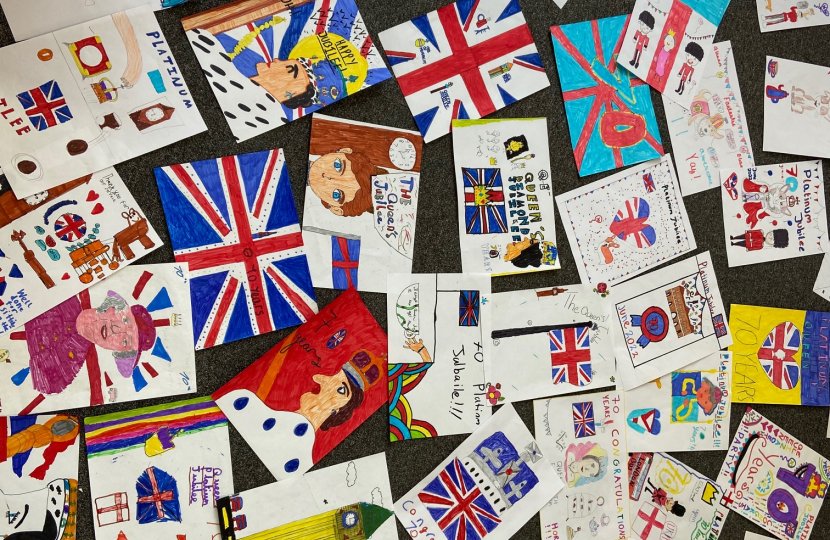 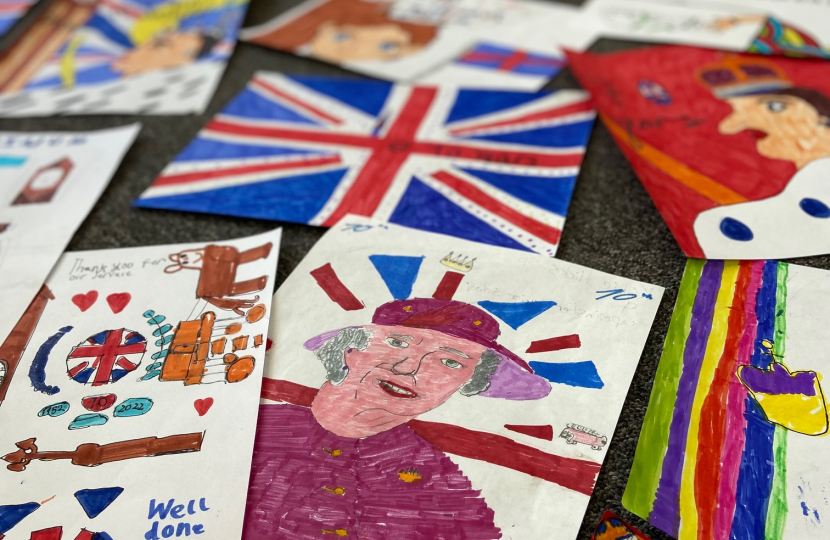 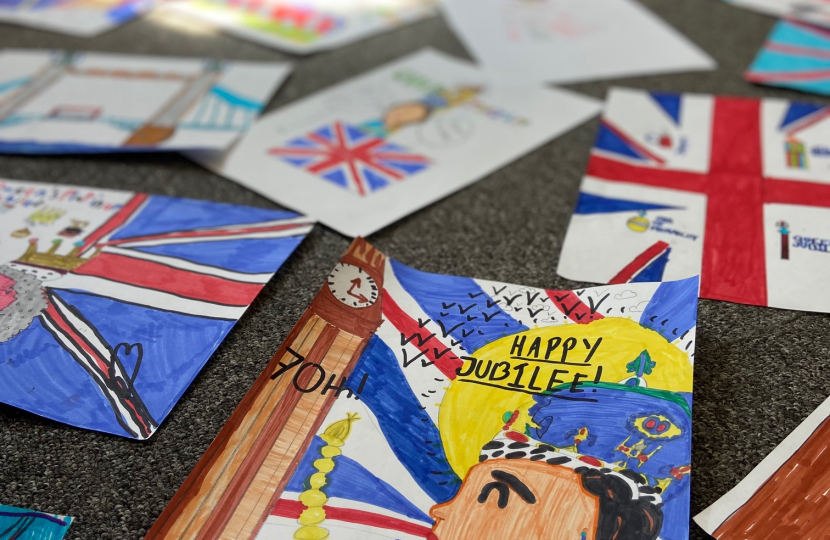 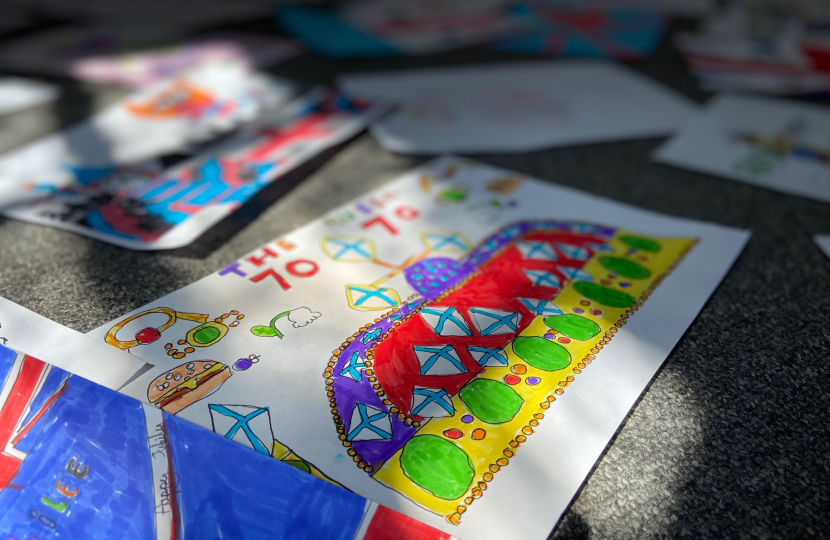 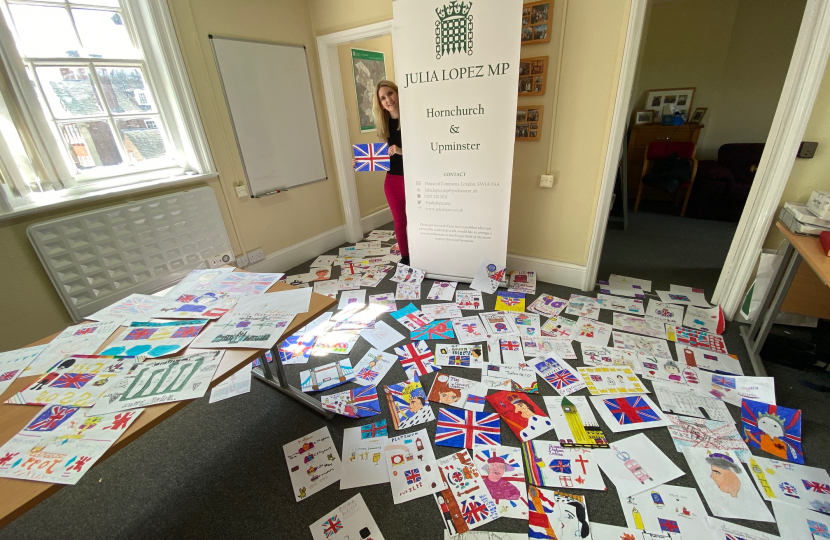 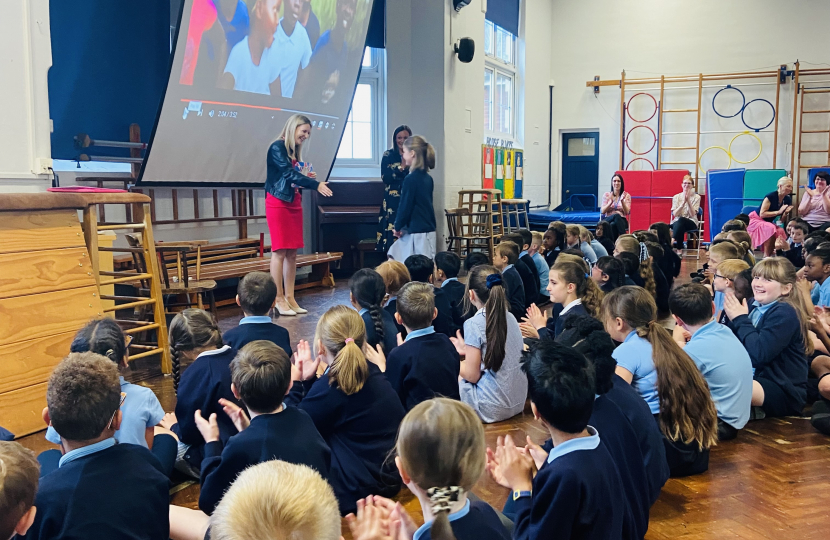 A schoolgirl from Benhurst Primary in Hornchurch has won first prize in a card competition to mark the Queen’s Platinum Jubilee. Eight year-old Emily Barnard’s drawing was picked out of hundreds of entries from school children across the Hornchurch & Upminster constituency after a call for designs by local MP, Julia Lopez.

Julia launched the Jubilee art competition in April so that a card could be sent on behalf of residents in her Havering constituency to the Queen to thank Her Majesty for seventy years of service. Emily was invited with her parents to join Julia in parliament and to present the printed card to Culture Secretary, Nadine Dorries MP, whose Department is sponsoring the Platinum Jubilee celebrations.

Emily’s visit to Westminster took place on the day of a Humble Address in the House of Commons during which Prime Minister, Boris Johnson, and MPs from across the country paid tribute to our longest-reigning monarch.

Julia explained, “This year the Queen becomes the first British monarch to celebrate a Platinum Jubilee.  Ahead of the seventieth anniversary of the Queen’s Coronation on 2 June, I wanted to invite budding young artists from across Hornchurch & Upminster to design a card for the Queen. The card will be part of the celebrations to commemorate this historical milestone and to thank Her Majesty for her dedication and service to the people of the United Kingdom and the Commonwealth.

We received some amazing designs, and I was so excited to see local students’ creativity! Out of over five hundred entries and the very fiercest of competition, we found a winner in 8-year-old Emily Barnard from Benhurst Primary School. Emily’s card was so original and showed such extraordinary talent. It was such a pleasure to have her for tea in the Pugin Room with her parents and show her Big Ben’s clock tower, Westminster Hall and Central Lobby. My team also managed to get her tickets to see the Chancellor and Prime Minister in the House of Commons Chamber! I really hope she enjoyed her morning – she thoroughly deserved it. ”

On 20 May, the local MP had surprised the competition’s two runners up with visits to their schools to share the news. Ismail Arshad from Harold Wood Primary took second place and Isabella Luff, aged 8, from Langtons Junior School came third, finding out about her achievement in a special assembly. Both Ismail and Isabella have been invited to parliament with their teachers in June to celebrate their achievement. In the meantime, Emily’s card is now safely in the post to Buckingham Palace and will hopefully arrive in time for next week’s national celebrations!

The conclusion of the card competition comes in a bumper Jubilee week for the Hornchurch & Upminster constituency after Historic England wrote to Julia confirming that the Queen's Theatre has been given Grade II listing. The modernist theatre was named after Queen Elizabeth II and is one of only six sites across the country with a connection to Her Majesty to have been listed to mark her Platinum Jubilee. Nigel Huddleston, Julia's ministerial colleague at the Department for Digital, Culture, Media & Sport said, 'These historic sites provide a fantastic opportunity to reflect on how much life in the UK has changed during Her Majesty the Queen's 70-year reign'.

Reacting to the news, Julia said, 'I am thrilled that Queen's has been recognised in this way as a tribute to Her Majesty. The theatre went through some really difficult times during the pandemic and has received government support from DCMS throughout so that this vital and much-loved arts venue could stay open to local residents and the wider community. The Grade II listing further secures the theatre's future and I hope marks the start of exciting times ahead.'