My speech in the Withdrawal Agreement debates 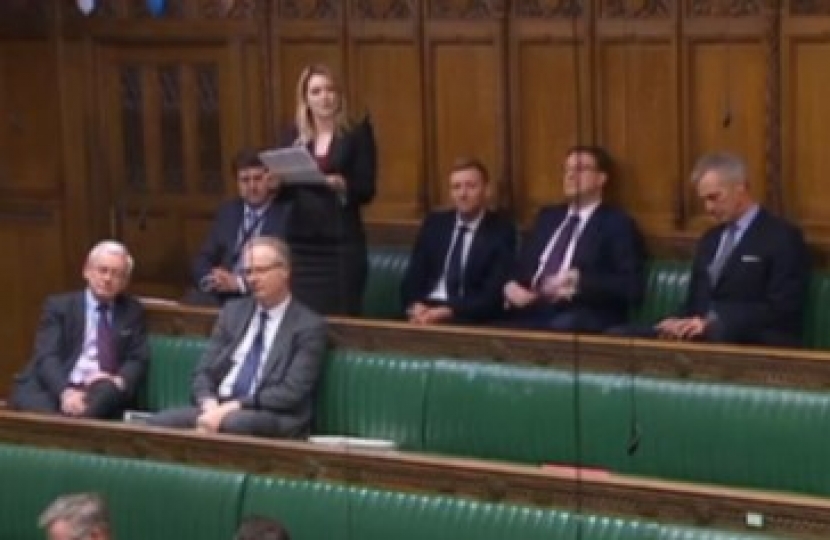 This is the speech that I made in parliament on the second day of the debates on the Withdrawal Agreement. I was not able to get through the final few paragraphs as a four-minute time limit was placed on speakers and I had to cut it down on the hoof. To watch my contribution, click here

I recall, not long after the Chequers plan was announced, looking across this Chamber during a session of PMQs and feeling a terrible sense of dread as I realised that a moment of reckoning was coming that could see this House completely out of step with the wishes of the British people. That moment is now upon us, with each parliamentarian facing a choice that could profoundly influence trust and faith in our democracy.

The EU referendum took place before 2017 MPs like me were elected, and I approached that poll as a private citizen with a genuinely open mind about the choice before us. The subject of Europe was never one that had consumed me. Along with countless British citizens, I thoroughly researched the issue, largely ignoring the hyperbole of both official campaigns. As I did so, I assumed that the ‘facts’ would eventually stack neatly in favour of one choice or the other as I totted up the benefits and drawbacks of each option. That never happened. I came to realise that the referendum was not a black and white issue with a correct answer but fundamentally a judgement call about the future – a future that neither side could claim to predict.

I judged that the EU was going to have to politically integrate more deeply if the Euro was to survive, creating an inevitable, potentially unbridgeable, fissure with non-Eurozone members. I saw an organisation that was unwilling or unable to change in the face of major crises at its borders and across its economies; a body which seemed ever more distant from the people it purported to represent; and whose structure was neither nimble nor flexible enough to deal with a fast-changing global landscape. When attempts to renegotiate our relationship resulted in so little, when referenda in other nations had gone largely ignored, the notion that we might influence fundamental reform from within seemed more the triumph of hope over experience.

I was equally fed up with the habit of our own politicians of blaming the UK’s shortcomings on Brussels. After the financial crisis and expenses scandal, faith in politicians seemed never to have been lower. I wanted greater accountability of the governing, and to bring power closer to and restore the consent of the governed. I did not tell anyone else what option to choose, but I decided on balance that I would vote Leave in the faith and acceptance that whatever the result, it would be implemented by those in power.

Now I am an MP, I believe ever more - as I look across at a continent where people’s genuine frustrations are translating into political extremism - that Brexit gives British politicians the chance to shape today what could prove an uncontrollable democratic crisis tomorrow.

Since my election, I supported the Prime Minister’s original Brexit strategy as set out in her Lancaster House, Florence and Mansion House speeches – not to try to cherry pick from the EU’s four freedoms, but while leaving to seek as wide-ranging and comprehensive a trading and security relationship as possible with our European partners. I accepted that compromise would be necessary to get there, and that aspects of the process would be complex and take time.

The Chequers plan, however, marked a turning point for us all with regard to our faith in this negotiation process. Far from pleasing either side, it united both Remain and Leave camps in its misguided attempt to achieve a half-in, half-out relationship with the EU. Once that plan had been roundly rejected by European negotiators and with requests for a new direction resisted, including accepting the free trade agreement Donald Tusk offered in March, we were set on the path to the deeply flawed Withdrawal Agreement that we debate here today.

With the clock wound down and No Deal warnings ramped up, this Agreement is now being fought for not on its merits but on the grounds that government has contrived to offer no better options.

Under its terms, on 29 March we technically leave the EU but enter straight into a transition period that will likely give us another two years of political discord, unable to move to the relationship we desire because we will have given up our negotiating leverage. Instead the terms of the Withdrawal Agreement will have painted us into a de facto customs union from which we could not unilaterally exit. For the privilege of being put in this position - which substantially undermines our autonomy as a sovereign state, which makes us rule takers not rule makers, which is worse economically and in sovereignty terms than the status quo, and which cuts off some of the best opportunities of Brexit - we shall agree to pay £39 billion.

The pretence that we shall be able to strike free trade agreements of any value, win back control of our laws and fulfil the manifesto commitments upon which all Conservative MPs were elected – I fear these assertions are a collective delusion, with this Agreement a clever ruse disguised as sensible compromise.

It has been convenient to portray this battle as one that takes place exclusively within the Conservative Party, to suggest that a small band of right wing Brexiteers is holding the moderate majority to ransom. However, this is not about what Brexiteers want. The reason why this fight matters so deeply is that this Withdrawal Agreement is not consistent with what British people voted for in June 2016 and places us in a position unworthy of our nation.

I do not believe this deal is the best we can get. It is the result of a series of misjudgements, from the sequencing of the talks to Chequers to the backstop to the failure to prepare for No Deal and the absence of a vision for where we are trying to take the country. It is no use our bemoaning the EU’s negotiation tactics. They did not ask for this, and they have subsequently acted aggressively in their interests. But the British people should rightly expect that we could have negotiated back.

Should this vote be lost, I would ask the Prime Minister to return to the EU, make clear the Withdrawal Agreement cannot get through this House, request the removal of the backstop, move on from the de facto customs territory and present a framework for a future trade agreement to our EU partners with our money staggered according to progress made. And in the meantime, step up every necessary preparation to leave on WTO terms.

I fear this House has spent the past two years trying to pretend that a political meteor did not in fact hit the UK in July 2016. There is no land of milk and honey awaiting us after Brexit, only the opportunities that we make for ourselves as a people from our own talents, efforts and energy. Whether we fail or succeed is up to us - and that is surely the point.

If we vote through this Withdrawal Agreement, however, it will be the EU that holds the key to our own destiny.