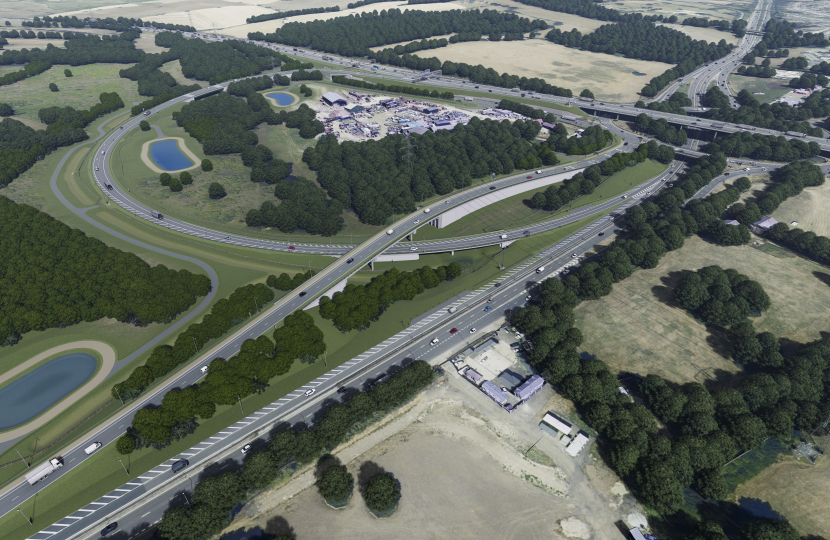 Junction 28 of the M25 is to be upgraded in further good news for road users and residents in Hornchurch & Upminster. Transport Secretary, Grant Shapps, gave the go-ahead to the junction improvements earlier this month, and local MP, Julia Lopez, today met Highways England to get further details of the new slip road that will now be constructed from the A12.

Since her election in 2017, Julia has campaigned to improve the local transport network in response to residents’ concerns about long traffic jams, poor air quality and delays in and around the M25, Dartford Crossing, Gallows Corner, A127 and A12.

The Junction 28 news comes hot on the heels of Transport for London’s confirmation that they will be applying to unlock up to £50 million of central government money that Julia secured for the improvement to the 1970s flyover at Gallows Corner. She will shortly also be meeting the Lower Thames Crossing to get the latest update on this vital new river crossing to relieve Dartford congestion and better connect Essex, Kent and East London.

Alongside efforts to improve traffic flow on local roads, Julia has run parallel campaigns to enhance surrounding green spaces and secure biodiversity net gain - a concept that sees any environmental impact of new road infrastructure offset by investment in more trees, wildlife habitats and parklands. National Highways have confirmed that the Junction 28 project will be net-zero with eight thousand trees planted and enhancement works made with Natural England to the River Ingrebourne to make it more attractive to water voles, newts and otters. Julia said, 'We are getting significant national investment in our local road network so that residents can have faster, less fraught journeys. But this is also coming with fantastic parallel investment in our green spaces with thousands of new trees. I am now campaigning to get local green spaces linked so that we have a seamless network of woodlands, bridleways, and parks as a lasting legacy for everyone to enjoy and benefit from'.

Commencing later this year, the works will improve both the flow of traffic and safety of Junction 28 with the most notable improvement being a new slip road providing a seamless link for northbound traffic on the M25 to the eastbound carriageway of the A12 – avoiding the roundabout. This will greatly improve the overall performance of the junction and, by reducing the volume of traffic on the roundabout, will also improve the junction’s safety.

Julia had previously made representations to the Department for Transport on behalf of residents of Woodstock Avenue in Harold Wood regarding the potential disruption the project could cause if the slip road were to be closed entirely at any time during construction. Thankfully National Highways that such a closure would not take place and that, due to most of the construction taking place off-site, road closures would be limited to a matter of weeks and would mostly occur at night. Construction is anticipated to be completed in the summer of 2025.

In the meantime, further information is available on National Highway’s website at: https://nationalhighways.co.uk/our-work/south-east/m25-junction-28-improvements/